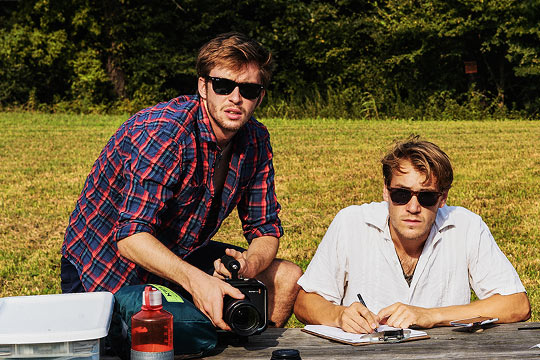 What if you woke up one day and decided to travel the nation in search of its most interesting untold stories?

You might end up visiting a 130,000-acre abandoned city, meeting warriors in the world's largest medieval role-playing festival, and receiving the gift of a giant garbage bag filled with donuts along the way.

Through every step of your journey, you'd learn. A lot.

It's just part of the show business life for alumni Chris Parr '16 and Harris Dirnberger '17, also known by their company name, Flutter Brothers Productions. Working in Hollywood with a docuseries that's running on Amazon, they're living out a dream that began when they were students at St. Scholastica with a camera and a lot of creativity.

Parr and Dirnberger first became friends as teenagers competing in the Junior Olympics for Nordic Skiing in Utah. Both ended up attending St. Scholastica. Parr studied biology, while Dirnberger majored in communication. Outside of the classroom, they discovered a supportive community where they were able to experiment, learn and grow.

"My time at St. Scholastica was so incredibly perfect for me," Parr said. "St. Scholastica provided a place and community that supported me and Harris in our every endeavor."

He first became interested in filmmaking when he received a digital single-lens reflex camera for his 19th birthday, and quickly realized its potential. As he and Dirnberger spent their free time studying topics like color theory and news production, visions for a possible career path began to crystallize.

"As a kid, I would make small skit videos with friends and film action sports stuff," Dirnberger said. "It wasn't until later that I realized I could really do something with it."

"That was and will be the best job I'll ever have," Parr said. Their supervisor, Sports Information Director Jesse Robinson, was a key early supporter.

"Boss-man Jesse Robinson created an outlet for us to produce content that we were passionate about," Dirnberger said. "His trust really jump-started everything we are doing."

Rob Larson, Assistant Professor of Communication, Theater and Art, was an important mentor as well.

"He set up the best educational opportunity for someone learning to film and edit, such as myself," Parr said. "He not only gave us infinite access to the CSS film studio, which had film equipment and green screens, but he never once hindered what we were attempting to do. He fully encouraged everything."

"He taught us to trust our creative instincts, and value our work as artists," Dirnberger said.

Larson called Parr and Dirnberger "two of the most creative and ambitious men that I have ever had the joy to witness at work."

"I was able to watch them cultivate their many talents over time, as writers, as producers and performers," he said. "Underneath their clever and lighthearted personas, we find incredible discipline."

He looks forward to continuing to watch their careers blossom.

"I always keep an eye on their work. One day we'll have a studio named after them."

Both Larson and Robinson gave Parr and Dirnberger the freedom to fail, a critical element for the budding filmmakers.

"Rob knew that we learned by doing. And yeah, that involved a lot of mistakes. But it also taught us the satisfaction we can receive from creating and filmmaking," Parr said.

"The St. Scholastica environment nurtured our creative endeavors in ways we never thought possible," Dirnberger said. "With support from classmates, professors, and staff, we were able to take advantage of what CSS had to offer. We were encouraged to do so."

During Parr's senior year, he and Dirnberger wrote and produced a feature film. The experience led to a revelation.

"Probably somewhere along that journey, I knew that I wanted to do that forever," Parr said.

After graduation, he took the plunge and moved out to Los Angeles, as he'd always dreamed of. He found a part-time job at a media company, but found it stifling to spend his time editing someone else's footage. He and Dirnberger hatched a plan to start developing their own content to fill a fast-growing niche for entertaining, educational material.

"We felt that a lot of short-form documentary pieces take advantage of ‘over-the-top, surface-level hype' when looking at interesting communities of people," Dirnberger said. "We wanted to dive a layer deeper and examine the human core that holds every group together."

They put together an exhaustive list of 300 possible subjects — some of the most interesting untold stories throughout North America.

"After months of narrowing it down, we settled on nine locations. We wrote a pitch deck, created a template, storyboard and script for the show," Parr said. After some unsuccessful pitches, the Flutter Brothers decided to produce the show themselves. "We set off on a 45-day road trip filming the most obscure and fascinating communities in America." It was the start of "Off the Cuf."

Subjects have included The Pennsic War, a massive medieval role-playing festival held annually in Pennsylvania; the community of Green Bank, WV, which is "wi-fi free" because it is home to the world's largest radio observatory and attracts people with electromagnetic sensitivities; and the lawless Slab City in the California desert, home to anywhere from 200 to 1,500 people in search of an alternative lifestyle.

Producing the show has been illuminating.

"In all, it has been an amazing learning experience," Dirnberger said. "You learn a lot about people from hundreds of hours of interviews … it has been fun to take that and piece everything into cohesive stories."

"Being on the road, meeting so many fascinating people, and seeing people help each other has been incredibly rewarding through this process," Parr said. "We've made amazing memories through producing this series that I am overwhelmingly grateful for. And, I get to create, learn and do something that I've never done before. However, my favorite part was definitely when a gas station attendant in Nashville gave us 17 pounds of free donuts in a trash bag."

"Off the Cuf" is available for streaming on Amazon Prime Video.

When they aren't traveling the nation in search of unique content for "Off the Cuf," Flutter Brothers Productions creates narrative content and documentary style videos for businesses. They are also producing a series called "To and From," doing some documentary work for "Red Bull" and the Youtube channel "Yes Theory," and doing post-production work for a documentary about "van life." They are in the developmental stages of some other documentaries, including re-working a script that was originally written by St. Scholastica alumni Pat Fischer and Collin Goodspeed.

Parr and Dirnberger will return to Duluth to give a presentation to other aspiring filmmakers during the Catalyst Content Festival Oct. 9-13. Learn more about their series at offthecuf.com.

Even while they were still students at St. Scholastica, the Flutter Brothers were already making a name for themselves in the filmmaking world. Read the story that looks back on the beginnings of their career.