Home » About Us » Stories » Fostering the love of learning in Alaska

Fostering the love of learning in Alaska

“We’re never going to go there”

Stephanie Clark ‘14 began the adventure of a lifetime because she was looking for practice.

During her senior year at St. Scholastica, she and a fellow elementary education major attended a job fair with the hopes of gaining interview experience. The two decided to participate in some interviews with a district in Alaska because they thought, “we’re never going to go there.”

But what started out as a practice interview for Clark quickly evolved into the real deal. She met with the interviewer for an hour, talked to the school’s principal and listened to kindergarteners engage in their classroom activities. The district offered her a job on the spot.

Clark is now entering her seventh year at Manokotak “Nunaniq” School in Manokotak, Alaska, a rural village in the southwest region of the state. And those sweet students from her interview must have left an impact because she’s been teaching kindergarten ever since.

The Duluth native described her transition from “downstates” to Alaska as initially very tough. She made the move alone and had to learn how to find her way until her fiance Christopher joined her seven months later.

“One of the biggest adjustments was how remote the village is,” she said. “The town is about 400 people. There is a post office, small clinic and [a] very small store. You fly in by plane and there’s no other access to the village unless you have a boat and can go by river.”

Internet service is also unreliable. During her master’s studies, the only place Clark could find 3G service was up a mountain, so she and her roommate would hike up the mountain armed with their tent and laptops. And a gun — in case they ran into any bears along the way.

Groceries are ordered over the phone and also flown in, but not inexpensively. Clark said a gallon of milk costs $14 and she recently spent $32 on a steak. During her first year away, she found herself especially missing access to fresh produce and fruit.

So Clark learned to adopt a subsistence lifestyle by foraging for berries, fiddleheads and other greens. She took up fishing and clamming (and canning, smoking and drying!) to fill up her freezer and save money on meat. She also hunts moose and caribou, and looks for seagull and herring eggs.

“We’ve learned to know what we want and what we need,” she said. And it turned out, she really loved the subsistence lifestyle and her community’s efforts to sustain it. 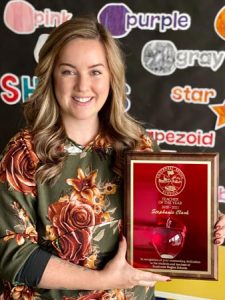 Stephanie Clark was named the 2021 Southwest Region School District Teacher of the Year.

The community has sustained her, too.

Clark found out that many teachers come for one year and leave, so when she decided to stick it out for a second year, that was the moment when community members began to welcome her and embrace her as a member of the village.

“I’ve made such incredible friends,” she said, “Some call me almost every other night to participate in a maq’ii, or steam bath, which is a very social event.”

Perhaps her most cherished memory was when one of her colleagues “named” her by giving her a traditional Yupik name.

“She sat down and talked with me, asked me about my family and what’s most important to me,” said Clark. “And then she named me Alq’aq, which means ‘oldest sister.’ It came from someone who had recently passed; names are given so that they can continue on.”

In September, Clark was presented with yet another incredible honor: she was recognized as her school district’s Teacher of the Year.

Clark calls the experience life-changing. And she attributes her success and grit in Manokotak to her time as an elementary education major at St. Scholastica.

“I really appreciated the program and I got so much out of it,” she said. “The professors are knowledgeable in what they do and every single one of them has a passion for teaching. That’s what got me so excited! I’d never really excelled in school until the education program at Scholastica.”

Ultimately, her undergraduate studies made her fall in love with teaching.

“I wouldn’t be here without St. Scholastica. It made me who I am and it got me to where I am today.”