Home » About Us » Stories » Teaching, learning and inspiring

The yellow bus wound through campus and parked in front of Somers Main Lounge. Outside, a small welcome party had formed; faculty and students from the School of Education, staff from the College’s Marketing Department and even President Barbara McDonald gathered to eagerly greet the special guests. And inside, the passengers were eager, too, their noses pressed up against the windows, trying to get a glimpse of Tower Hall.

The campus visit had actually been their idea, a well-deserved reward for “showing their paw power” — the school mascot is a lynx — and achieving a collective class goal: filling in Mr. Potato Head with all of his pieces. When their teacher Katie Stresow (MEd ‘17) had asked the class where they would like to go on a field trip, they made two requests, the public library and “the Castle.” 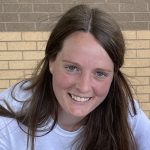 Stresow is also a student, currently enrolled in the College’s Doctorate in Educational Leadership (EdD) program. Her class of 17 had seen Tower Hall as the background on her laptop and the image left an impression.

“I never would have thought to bring a kindergarten class to a college campus,” Stresow said. “But I really liked that the kids brought that up. When I reached out to Chery Lucarelli [chair of the program], she loved the idea, too. We realized it would inspire them and help plant the seed that this is a possibility someday. ‘If you want it, it’s here for you.’”

And on a sunny April afternoon, the students’ wish came true. They stopped at Mount Royal Public Library, then made their way to St. Scholastica for lunch, a tour and a high-five greeting from Storm the St. Bernard. For many of the students, it was a day of firsts, including their first visit to a college dorm room. “They saw the bunk beds and asked if it was a hotel,” laughed Stresow. “One of the girls in my class said, if we’re spending the night in this hotel, I get the bed with the pillow.”

The visit was especially meaningful for Stresow, too, a way to share a piece of her identity as a graduate student with her class. “Learning never ends and I’m modeling that for my students. I tell them, ‘you can be a teacher but still be learning as well.’”

Making an impact, abroad and at home

Stresow’s own journey into education began as a young child. Her mother ran a daycare in Hermantown, Minnesota and she grew up with other kids in an environment filled with teaching and learning. She pursued psychology as an undergraduate student at UMD but found herself unhappy and unfulfilled by the coursework.

“My mom said, why don’t you just go into education? You love teaching and you love kids,” she recalled. “I hate when my parents are right, but she was right. And immediately when I joined the elementary education program, my grades improved and I found myself really liking the coursework, wanting to go to school.”

Stresow graduated in 2011 and began her career overseas teaching in international schools in Russia, Slovenia and Israel. She returned to the States to pursue her master’s degree at St. Scholastica and joined the Duluth Public Schools in 2016. Although she needed to adjust and adapt to U.S. based standards and curriculum, the most rewarding part of her international career has always remained the same. “Kids are great anywhere,” Stresow said. “That is the best part of the job; it’s the kids.”

During the pandemic, Stresow had a lot of time to “sit with herself” and reflect on what else she could be doing as an educator. She wondered how she could challenge herself in new ways when an email about the College’s new EdD program arrived in her inbox. It felt like a sign.

“I thought, you know what, that’s what I’m looking for. I love to learn, I loved my time at St. Scholastica and eventually, this might be the right path to open up more doors within education and have an even bigger impact.” She applied and was accepted into the program’s first official cohort.

Two years in, the experience has been an inspiring one. “I do a lot of listening, hearing about everyone’s life experiences and taking it all in,” she shared. “I feel like the other members of the cohort have lived such full lives; I’m really in awe of their accomplishments. Erin [Karlgaard] was nominated for teacher of the year in Minnesota, and having conversations with her gives me goosebumps!”

Stresow admitted that, along with feelings of inspiration, she has also battled some imposter syndrome, and questioned whether or not she truly belonged in the program. Through feedback from Lucarelli, conversations with fellow learners in her professional learning community (PLC) and the passing of time, Stresow has come to recognize that her contributions are meaningful; her voice does matter.

“I love my PLC group,” she said. “We’ve built such great relationships where we can sit and meet to bounce ideas off one another and talk about coursework or just life. They’ve really taken me under their wing and made me feel very welcomed.”

Ultimately, the experience has earned Stresow some solidarity with her kindergarteners, whether they are in the classroom or embarking on a field trip. “I tell them, even when you get older, things are still challenging. I still struggle and things aren’t easy, but we get to learn from each other. And I get to learn from them.”