Home » About Us » Stories » Bridging the gap

Kristin Rognerud ‘03 has been a runner her whole life. She’s also a fierce advocate for the inclusion of women in all spaces. So when an opportunity arose that allowed her to “bridge” her pastime and her passion, she jumped at it.

Empowering women along the racecourse 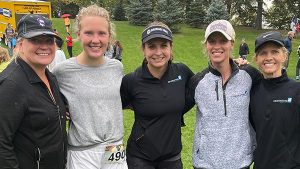 Rognerud, center, and her colleagues from Ascential Wealth during the inaugural Bridging the Gap run.

Rognerud had just registered to participate in Bridging the Gap, a brand-new race in Duluth that was created to empower women while raising awareness about the pay and accessibility gaps they face in the workforce. She learned that a portion of the race proceeds would go towards providing free business services and access to financial resources to women leaders, entrepreneurs and runners in the community.

But she was compelled to do more.

“After I signed up, I wondered if there was a way I could help and be a part of it in a bigger way,” she said. “The message grabbed me, spoke to me. So I reached out to the event organizers and asked, ‘hey do you need sponsors?’ and they said, ‘yes, absolutely!’”

Rognerud made a case to her fellow partners at Ascential Wealth Advisors and they agreed to come on as the race’s presenting sponsor. On Saturday, Oct. 2, her efforts helped “bridge the gap” while bringing together 584 runners for the inaugural ten-mile run. Ninety-eight percent of the participants were women.

“It was a terrific cause that combined two things I’m incredibly passionate about, running and women having equal opportunities to their male counterparts.”

For Rognerud, the mission of the race resonates personally and professionally. Since 2006, she has worked in the financial services industry, starting out as an investment assistant and eventually becoming partner at Ascential Wealth, an independent firm in Duluth, Minn. While she acknowledges the field has become more diverse since she entered, it continues to be a male-dominated industry.

“It’s changing and there are many more women coming into financial services, but they’re mainly in support roles rather than financial advising roles. When I go to a conference, I still see far more men than women.”

Currently, Rognerud is the only female advisor at her firm. She hopes that her four children, Madi, Cali, Reid and Zion will have access to “every opportunity available to them in life and not be afraid to ask for things,” but she also recognizes the important role she plays in modeling this inclusion for her daughters and sons.

“We need to keep pushing this idea that women belong in these roles,” she said. “Not only that, they add a tremendous amount of value.”

Since graduating from St. Scholastica in 2003, Rognerud has remained close to her alma mater. She developed and taught a personal finance class for the College’s business students. She stays in touch with former faculty, including Bob Hoffman — whose class inspired her to switch majors from management to economics as an undergraduate student. She also serves on the Board of Trustees’ finance and investment committee.

And most recently, she founded a scholarship to bridge the gap she sees in the workplace every day.

The Saints Ascending Leadership Award is a $1,000 scholarship for junior or senior finance majors who demonstrate financial need with preference given for female applicants. Rognerud shares that her goal is to eventually endow the scholarship but for now, she considers it a “baby step” towards inspiring and promoting more women to choose a career in finance.

Ultimately, Rognerud believes that Ruth Bader Ginsberg said it best, “Women belong in all places where decisions are being made.” This underlying philosophy, the advocacy for and inclusion of women, continues to guide her work as a professional and as a philanthropist.

“I think about the things I can do something about personally,” she said, “and this one is close to my heart.”