Home » About Us » Stories » Transforming experience into advocacy

As a high school student in North Branch, Chelsea Knutson ’24 knew she wanted a career in healthcare, but she wasn’t exactly sure what type of healthcare studies to pursue. Originally, she had considered becoming a medical lab scientist and she had also looked into a surgical tech program before ultimately landing on health information technology.

Knutson’s own health played a factor in the decision. She was born with a rare form of muscular dystrophy and knew that there would be some limitations as a college student. “I have contractures on my joints so they don’t straighten all the way,” she said. “And I’m on a ventilator and require 24/7 caregiving which really hinders my ability to live away from home.”

She enrolled at Anoka Technical College and was nearing the completion of her associate’s degree when she learned about the College’s health informatics and information management programs.

“St. Scholastica did a presentation in one of my classes, talking about the bachelor’s and master’s programs and it got me interested. My goal was always to get a bachelor’s degree but I had to figure out where I’d be able to go. Knowing that I could pursue this, and be able to work from home; once I started, I loved it.”

Knutson is currently enrolled part-time in the College’s online health information and informatics management bachelor’s program and will graduate in 2024. Overall, she said, her experience has been amazing.

“I love the online program and the flexibility to do the coursework as it fits into my schedule,” she said. “I’ve also had a lot more praise for the work that I do, which is something that I’ve never had before.” She is especially appreciative of the accommodations she’s been offered — consideration for absences, extra time on tests, requesting a note-taker — even as an online student.

“What I love most about St. Scholastica is the three-day extension. I can send an email to the instructor and they don’t even have to respond in order for it to be in place.”

After she graduates, Knutson hopes to use her degree and experience for advocacy purposes. “A lot of people including myself struggle to get the equipment that they need. Insurance companies will say we don’t need it because it’s not a medical necessity. I hope this degree can help me advocate for better insurance approvals for equipment that people with disabilities aren’t able to get.”

The love of the game

In addition to her studies, Knutson plays competitive soccer and hockey, known as “power sports” because the athletes who participate use an electric or power wheelchair. She was introduced to power hockey at MDA Camp as a kid and the love of the game intensified.

“Every summer, we’d have a week where we’d play power hockey and compete in tournaments,” she said. “People from the power hockey league in Minnesota would come and help us learn how to play the game. Eventually, we had a big North American meet-up in Minnesota and had two teams participate. I got to experience playing with teams all over the U.S. and Canada.” 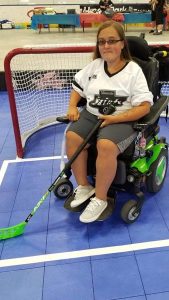 Hockey is played on a gym floor with five players per team: three forwards, one defenseman and a goalie. Athletes use a wiffle ball instead of a puck and the majority of Knutson’s teammates play with a floorball stick which has more contour than a hockey stick to handle the ball. Games last three-15 minute periods and feature a goal net which is about 6” shorter than a regular net. 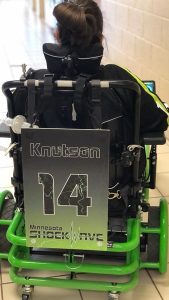 A hockey teammate introduced Knutson to power soccer in 2018, also played on a court in a soccer chair, which she describes as a power chair that looks like a go-cart with a metal guard around it. The power version also has two unique distinctions: the ball is 13” and not allowed to leave the ground. Three players act as forwards while a goalie defends the space between two posts.

For Knutson, power sports have represented a fulfilling, social experience; one that is sorely missed since the pandemic has halted the teams’ ability to come together safely. Nevertheless, she maintains an optimistic outlook. “I try to stay as positive as I can and love spreading awareness about disabilities and fun things that we are able to do with some adaptation.”

“I wouldn’t be who I am without my disability, but also I don’t want people to be like, ‘oh she’s the girl in the wheelchair.’ As a disabled person, I use both [disability-first and people-first language] interchangeably, but it’s important to ask.”