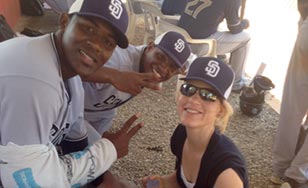 Even though the play there isn't at a major-league level yet, Carr's preparation is nothing short of it.

Her responsibilities didn't end with the game. She also helped injured players through long-term rehab programs for ACL reconstruction, Tommy John surgery and other conditions.

"Many of the injuries that I worked with there were ones that I had already been exposed to in class," Carr said.

"The program has given me ample experience in thinking quickly and critically. I've had to make many quick decisions here and have been able to trust myself based on the success I had during my first year at CSS."

Now in her second year in the program, she isn't entirely sure what she'll do after she graduates with her master's in 2015 — though the experience has her contemplating a return to professional sports.

But whatever she chooses, she'll be ready.

"The variety of experiences I've had at CSS has been wonderful and is helping me prepare for what I want to do in the long run, whatever that may be."