That’s because in the short time since he graduated, Vinnie has compiled a list of experiences that could be the envy of any scholar and the fascination of any employer.

“The education I received at St. Scholastica, both in the mathematics department as well as other general courses, was outstanding,” he said. “The small class sizes and low student/faculty ratio allowed for more classroom questions, more material to be covered and a more thorough education in general.”

This personal touch made all the difference for Vinnie. Whether it was joining the mathematics club, or connecting with professors like Luther Qson, chair of the mathematics department, outside of class, the tight relationships Vinnie formed here encouraged him to set his sights a little higher.

“Professors from CSS continually encouraged me take the next step in my education, to raise the bar, to set higher goals,” Vinnie said. “It was at CSS where I realized that it was indeed possible to accomplish these goals with the right mindset.” 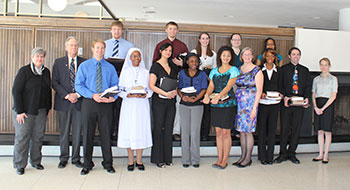 It was also at CSS where Vinnie became a McNair Scholar. This federally funded program prepares racially underrepresented, first-generation and low-income college students for graduate school and assists with internship and research placements.

Through a series of workshops, Vinnie learned how to achieve his educational goals and pursue research and grad school opportunities in the field of engineering – a rare thing for a “pure” mathematics major.

“Where I am today is a direct result of being a McNair Scholar,” Vinnie said. “Everything started with the McNair program. Involvement in it led to internships, which led to an excellent opportunity at MIT, which ultimately led to my current position.”

That position is a business analyst at Accenture in Minneapolis – allowing Vinnie to add a Fortune Global 500 company to that evermore-impressive resume.