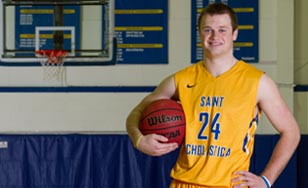 Zach Dahlman offered a stranger the gift of life

When it came to choosing whether or not he would help save a life, St. Scholastica student Zach Dahlman '18 didn't worry how the inconvenience and discomfort of stem cell donation might interrupt his college experience.

In August 2015, Dahlman agreed to an oral swab as part of an on-campus "Be The Match" event. The swab results determine whether you match a patient in desperate need of stem cells, which create healthy bone marrow in the recipient.

"When I found out I was eligible to donate [stem cells] I was very scared for my health, and feared that it may not even work," Dahlman said. "But at the same time I knew it was the right thing to do and I had to try."

When Dahlman received the call that he was, in fact, a match, he didn't hesitate in his decision to proceed. Instead, he embodied the Benedictine Values held dear by the entire CSS family — specifically, respect for all life and working to support and create community.

"In this instance, even having a possibility to save a person's life means you try to with no questions asked," he said.

Leading up to the donation, Dahlman underwent two weeks of blood draws and white-blood-cell-rich injections that left him dizzy and nauseous. The affair culminated in a marathon nine-hour donation appointment that drained his energy — it took nearly two weeks before he felt 100 percent.

The gift, and beyond

Dahlman has designs on graduating with a degree in finance. He'll also have a chance to improve upon his 2015-16 basketball campaign where he averaged seven points and four rebounds in 19.7 minutes per game.

Dahlman's gift didn't go unrecognized by the college community. He was given the Humanitarian Award at the 2016 Saints Sports Awards at the end of April.

Dahlman is moving on from his donation experience, but he has one last milestone — meeting the man whose life was spared because of this generous gift.

"I found out [on March 20, 2016] that my donation was successful and the recipient had no issues or infections," Dahlman said. "So it's nice to know that it was worth it, and someday I will be able to meet the man I saved."

Though Dahlman might downplay his own contribution, there's no denying its impact. And that's really the only thing that matters.