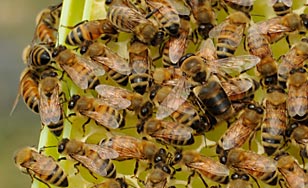 As any elementary school student can attest, snack time is an important part of the day. CSS students David Gehlen, '16, and Ben Baltich, '14, can't help but agree, as a recent snack time of theirs inspired a pretty sweet idea.

"We went to this retreat at St. John's last winter and for a snack they had this wonderful honey, this St. John's honey," Gehlen said. "We were joking around about how cool it would be to have a CSS honey."

After the retreat, Gehlen started researching and, after receiving permission, formed "The Bee's Knees" — a club centered around beekeeping — with Baltich, a fellow marketing and management major.

"It's really interesting seeing these tiny creatures doing such cohesive work together," Baltich said. "It kind of makes you wonder why people aren't more cohesive when it comes to doing jobs. It's inspiring in a weird way."

Putting the "bee" in Benedictine

They also find inspiration in beekeeping's link to the school's Benedictine roots. In the early 20th century, Karl Kehrle — a Benedictine monk at Buckfast Abbey in England who went by the name "Brother Adam" — isolated the Abbey's population of bees and bred them for pest and disease resistance as well as cold tolerance. Thus his own strain of bee, the Buckfast bee, was born — which people still use today.

"Beekeeping is all about stewardship — taking care of nature's resources and educating others to do the same — and it seems like a good thing for us to do here at St. Scholastica," Gehlen said.

Get a behind-the-scenes look at the Bee's Knees in action. View gallery.

Learn more about becoming a part of the Bee’s Knees club by emailing David Gehlen at dgehlen@css.edu.

"If the bee disappeared off the surface of the globe, then man would have only four years of life left. No more bees, no more pollination, no more plants, no more animals, no more man."