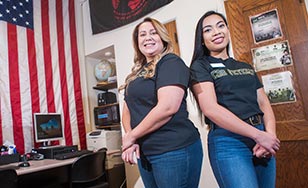 "The two most important days of your life are the day you were born and the day you find out why."

This quote appears on Kristel Baltazar’s email signature line and it articulates her personal philosophy, which she discovered while serving in the Air Force National Guard — a desire to seek out and live her purpose.

"You just have to figure out why you’re here," she said. "I definitely feel I’m finding out my purpose in life. The military and St. Scholastica have been a big part of that."

Kristel’s friend and fellow nursing classmate, Amy Anderson, espouses the same quality. "You really learn a lot about yourself when you serve in the military," she said. "You mature quickly and develop a very strong work ethic and goal mentality."

It’s clear that Baltazar and Anderson have forever been changed by their experiences serving in the military. Both agree it’s been invaluable and have surprised themselves with how much they love their military careers. Baltazar’s actively enlisted in the Air National Guard and Anderson has completed her term with the Navy.

From the Philippines to the National Guard

Baltazar’s path to the Air National Guard and St. Scholastica began when she was growing up in the Philippines. "The percentage of Filipinos serving in the military is quite high because of the regard they have for the United States dating back to WWII," she said. "I grew up with a love for the U.S. that inspired my military career."

Baltazar moved to Duluth, Minn., from the Philippines when she was 12 years old. The idea of joining the military was first introduced by her stepfather, who served in the Air Force, but she says the decision to enlist was solely hers. She admits she was scared when she signed on the dotted line, but says it has turned out to be the best decision she’s ever made.

Anderson decided to join the Navy when she graduated from high school in California. "No one in my immediate family is a veteran," she said. "I decided to join after a military recruiter visited my high school. I liked the idea of traveling the world and having my college education paid for."

With three back-to-back deployments on an aircraft carrier that took her to nearly every country in the Western Hemisphere, Anderson certainly fulfilled her wanderlust. But the best part, she said, was meeting her husband, who worked next to her on the carrier.

The place to go

Both women came to St. Scholastica to take advantage of their military education benefits. They chose CSS because of its notoriety for being military friendly and its strong reputation for nursing education.

"I chose St. Scholastica because it was a Yellow Ribbon School and they have a lot of veterans here," said Baltazar. "The military education specialist told me to go to CSS because they have excellent resources for veterans, and mentors who would help me be successful. I’ve found this to be a very supportive place for veterans and active servicemen and women."

Anderson agreed. "I looked at different schools and ultimately chose St. Scholastica because I wanted to get my nursing degree and I heard that if you want to become a nurse, St. Scholastica is the place to go."

Both of them say the Veterans Resource Center (VRC) at the College has been one of the best things about St. Scholastica. "It is a place we can go to escape civilian life to socialize and study with other veterans," said Kristel. It’s also where they met Jessica Johnston, the Veterans Resource Center Coordinator, someone they both say has been an invaluable source of support.

Anderson and Baltazar serve as VA student leaders, working in the Veterans Resource Center (VRC) and mentoring other military students while they both pursue nursing degrees. Baltazar says she’s considering a military career and continuing her education to become a Physician Assistant or Nurse Practitioner. Anderson also hopes to go to graduate school and possibly work at the VA Hospital or somewhere else that cares for veterans.

"St. Scholastica really understands the needs of veterans and they definitely don’t want us to fail," said Anderson. "It’s the place to go."

Thanks to our veterans

The College community is grateful to have such a strong contingent of students who have or are currently members of the uniformed services. There are a variety of services available to veterans on campus.