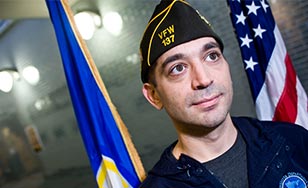 As such, you wouldn't think he'd be one to settle down. But when asked about his plans for graduation, he had a surprising response.

"I plan on taking classes at St. Scholastica for the rest of my life."

That's true even after he graduates with a degree in marketing and continues with his full-time job at the Minnesota Department of Veteran's Affairs.

And with help of CSS' Veterans Resource Center and the educational benefits from the U.S. Department of Veterans Affairs (VA) and the state of Minnesota, he can.

When Martin left the Navy in 2011, he relocated his family from Norfolk, Va., to Duluth. And when he got here, he wanted to pursue what he considers to be veterans' greatest benefit — education.

"With my post-9/11 benefits from the VA, the costs would be covered wherever I went," Martin said. "So why not go to the Ralph Lauren of colleges?"

"I'm a Jewish-Israeli who was raised as a Mormon attending a Catholic school and I've always felt good here," Martin said.

"Every college is different. Some are more veteran-friendly than others," Martin said. "We're definitely good at CSS. They really go out of their way to help us here. It's a very military-friendly school."

And though it's hard work, he appreciates the opportunity.

"The hard part is over. School is fun," Martin said. "I just want to learn as much as I can now. It's great having that option, because most people don't. That's why I feel very lucky to be where I'm at."