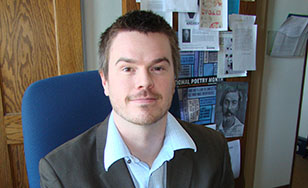 A faculty member at The College of St. Scholastica has won a $9,600 grant that will enable him to assemble a manuscript of his poems.

Ryan Vine, an associate professor of English, is one of just seven applicants in the poetry category to win a 2015 Artist Initiative Grant from the Minnesota State Arts Board.

Vine will complete work on a manuscript of poems and submit it to "first book competitions," or contests for poets who haven't produced a full-length book. He will hold a public reading of his works at the Teatro Zuccone in Duluth in October 2015.

Vine, who received his M.F.A. from Emerson College, is St. Scholastica's Rose Warner Professor and serves as faculty advisor to The Freshwater Review, a student-faculty-staff literary journal. He teaches a number of English classes at the College.

His award-winning poems, which can be found online at ryanvine.com, have appeared in many literary journals and magazines, and have twice been read by Garrison Keillor on "The Writer's Almanac."

His criticism appears regularly in the Star Tribune of Minneapolis. His poems have inspired paintings, film shorts and numerous musical compositions. In 2011, he was one of five poets chosen from across the country to collaborate with New York City-based ensemble Lunatics at Large, which culminated in a reading at Carnegie Hall.