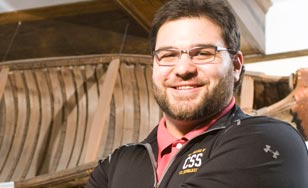 Benji Sam's hands are warm. They always have been. Even when he was a child they stood out — especially to his grandmother.

"She always told me I had healer hands," Sam said.

"We had a prayer ceremony," he said. "We set a dish, made our asemma (tobacco) offering, and just prayed for help, guidance and pity from the spirits."

"After that, I felt really confident about where I wanted to go with my life. I knew that I wanted to do physical therapy."

"When I toured St. Scholastica, the people here were just a lot more personal and friendly and really wanted to help me get to that next level, even if it wasn't here," Sam said. "I didn't tour any other schools after that."

"With all the scholarships, it was actually cheaper for me to go to CSS than to most state schools," Sam said.

And once he got here, he wasn't disappointed.

"I love it here. Love it. Wouldn't change a thing," he said.

Now, as a junior exercise physiology major here, he's helping others do the same. For the past two years, Sam has helped other students navigate the ups and downs of college as an RA. He's also involved in the Indigenous Student Alliance — a club at CSS that promotes indigenous equity, spreads Ojibwe culture and helps students find a home on campus.

"A lot of Native American students who come here are from a smaller areas," Sam said. "They grew up really involved in their tribe, so stepping outside of that box and coming here can be a big step. So we give them a place and a group of people that can help them transition."

And he doesn't want it to stop.

"I grew up fishing the shores of Lake Mille Lacs, ricing the surrounding lakes, hunting in the woods and providing for myself and my family," Sam said. "That's where my people are from, so that's where I want to be — back at our hospital helping people I know get back into doing what they need to survive."

And, like Sam's grandmother predicted years ago, they'll be in good hands.

Read more about Sam's experiences at CSS in his blog.

CSS has a program that focuses on doing just that.

Sam's path to CSS was paved by a number of scholarships — including the Sister Timothy Kirby Social Justice Scholarship and the John Baggs Memorial Scholarship.

Learn more about these and all the other scholarships CSS offers.

Winds of Change magazine named St. Scholastica as one of Top 200 Colleges for Native Americans.