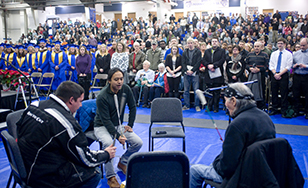 St. Scholastica will celebrate its latest class of graduating students with a commencement ceremony at noon Saturday, Dec. 17 in the Reif Gymnasium on campus.

The commencement speaker will be George Goldfarb, president and chief executive officer of maurices and dressbarn. Goldfarb began his career at maurices in 1985 and has held various positions in many departments. In October 2016, he was named president and CEO of maurices and dressbarn. He provides strategic direction and oversees all aspects of both brands, which together generate more than $2 billion in annual revenue. Goldfarb has been involved in many community organizations' boards, including the ALLETE board of directors. maurices is the major sponsor of the maurices Community Clinic at St. Scholastica's new Health Science Center.

The student speaker will be Trent Pepper, who is graduating from the Scholastica's Rural Health Care MBA Program. He serves as an in-house attorney for Benedictine Health Systems. Prior to joining BHS, he worked as an attorney in private practice and served as a law clerk for the Minnesota Supreme Court and the United States Court of Appeals for the Eighth Circuit. He lives in Cambridge, MN, with his wife and four children.