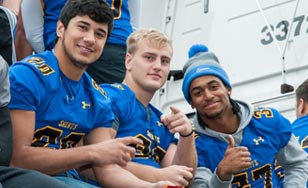 The Saints football team took time off from prepping for their Homecoming Game to close out the parade.

Hundreds of students, alumni and friends of the College converged on campus for a full slate of Homecoming 2016 weekend activities under the theme "Storm For President."

The celebration got a special start on Friday, with the Inauguration of Dr. Colette McCarrick Geary as the 12th president of the College. An audience of nearly 1,000 filled Reif Gymnasium.

The weekend's Homecoming events kicked off Friday evening. Activities included a chili feed, the Athletics Department's Hall of Fame Social and Dinner, and the popular Student Talent Show staged by the Student Alumni Association. Here's a photo gallery of some of the week's homecoming activities.

Saturday's lineup included a first-ever football alumni scrimmage, the on-campus Homecoming parade, family fun activities such as science experiments with St. Scholastica faculty and games put on by student clubs, receptions for the Honors program and for friends of the library, and a concert by student instrumental and choral ensembles.

Two varsity teams were in action at home. The women's volleyball team took on The College of Saint Benedict. The popular Homecoming tailgate party culimnated in a sendoff for the football team, which took on the University of Northwestern-St. Paul at Public Schools Stadium.

A Homecoming dance was scheduled for Saturday night.

Plans called for a Mass in Our Lady Queen of Peace Chapel to conclude Homecoming 2016 on Sunday morning.