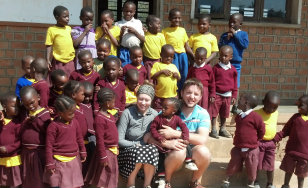 Amanda and Nate Byrne with schoolchildren in Sumbawanga, Tanzania

A couple of St. Scholastica alumni have traveled halfway around the world to put their Benedictine values into action.

After raising $1,175 to help establish a new school in Sumbawanga, Tanzania, Nate Byrne, '12, and his wife, Amanda, '12, embarked on the journey of a lifetime to do their part to make the school a reality.

The Byrnes, both teachers, were inspired to make the trek by Nate's parents. His mother Paula is the chair of St. Scholastica's traditional nursing undergraduate program, and has previously traveled to Imiliwaha, Tanzania.

Imiliwaha is the site of an orphanage, clinic and school run by Benedictine nuns who have a longstanding relationship with the St. Scholastica Monastery. St. Scholastica Sister Beverly Raway '67 coordinates the College's service-learning trips to Tanzania, like the one that made such a strong impression on Nate's parents.

Nate is excited to get a firsthand look at everyday life in Tanzania.

"It's not an experience that I would have anywhere close to, anywhere in the United States," said Nate.

The Tanzanian government donated a parcel of land in Sumbawanga to the Benedictine nuns to build a new school. Project leader Sister Afra called upon her support network at St. Scholastica for help.

"One of St. Scholastica's missions is to help out other Benedictine sisters around the world," Nate explained.

Nate, who teaches kindergarten, and Amanda, who teaches high school English, are helping with construction, curriculum development and teaching.

"Sister Afra promised that we would go to bed tired every night," Nate said.

By soliciting donations from the community, the Byrnes raised nearly $1,200 for desks, books and other school supplies. They're excited to have found a meaningful way to give back through their work, a value that was embedded in both of them during their time at St. Scholastica.

"Those professors of ours put those Benedictine values into every lesson," Nate said.