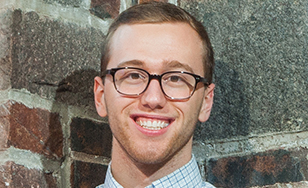 Recent graduate Andrew Bailey, a History and Theology & Religious Studies major,  won this year's award. The Student Leadership Award honors a graduating student for mission-related leadership in academics and co-curricular activity during their time at St. Scholastica. In nominations, faculty and staff members praised Bailey for his collaborative leadership style and embodiment of the College's Catholic Benedictine values, particularly respect and love of learning.

During his time at St. Scholastica, Bailey was involved in Nordic skiing and cross country running, Benedictine Friends, CSS Catholic, and the Nordic Ski Club. He helped to establish the Scholastica Forum, a partnership between the Student Government Association and the student newspaper, The Script, to create civic dialogue and discuss political issues.

He was named a Phillips Scholar, which gave him the opportunity to design and lead a youth leadership conference on campus for middle school students.

"This was one of the most rewarding experiences of my life," Bailey said.

He was heavily involved in the Student Government Association, where he took pride in helping other students discover their voice through advocacy and leadership. He served two terms as the student body president.

"Through the clubs, athletic teams, and other groups I have been a part of at St. Scholastica, I have made friendships that will last a lifetime," Bailey said. "I could not be more thankful to be a part of the CSS community."