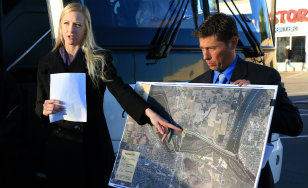 As a little girl sharing a room with her mother in a two-bedroom trailer, Autumn Lehrke made herself a promise.

She vowed she would get a good education, work hard, and never have to worry about money. She soaked up life lessons from her hardworking mother, who held down two jobs and raised five children on her own after a divorce from Lehrke's father.

"My whole life I've always been pretty ambitious," she says. "My mom taught me that education would be the key."

At 15, Lehrke got her first job. At 16, she enrolled in Inver Hills Community College. At 18, she started her first business - a Hertz rental agency where she eventually went corporate and helped Hertz expand its presence in St. Cloud while managing two locations. She moved on to work for Standard Parking Corp., managing six locations and over 60 employees.

Seeking an education that would accommodate her entrepreneurial lifestyle, Lehrke found her path at St. Scholastica's extended campuses at St. Cloud and St. Paul.

She took the maximum amount of courses at each campus.

"As a student who works, St. Scholastica was perfect," Lehrke said. She earned a management degree in 2004 and a Master of Arts in Management in 2010. That year, she was also elected to the Washington County Board of Commissioners. Though she was defeated in her re-election bid in November 2014, she is proud of her record of service. During her time on the commission, she served as chair and was involved in more than 30 committees.

Her business acumen and educational foundation helped her in her role as a commissioner. Along with her colleagues, she said, she helped save taxpayers millions while increasing local services.

Lehrke and her husband run a property management company, recently started a brew pub, and are in the process of adopting a child.

"I set a lot of high goals," Lehrke said. "I grew up poor - and I want to be able to give my family a great life."