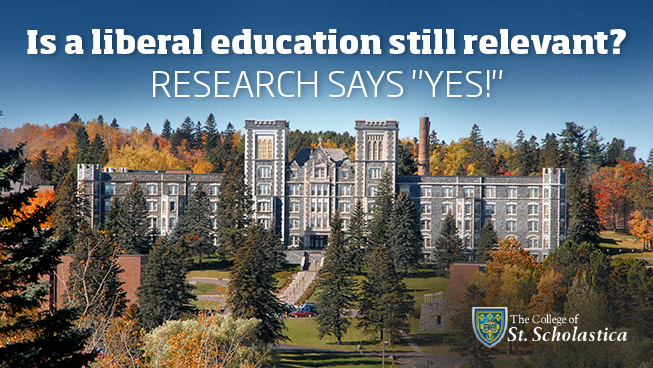 Recent years have yielded a number of critical reports that cite a decline in the importance of a liberal education. “College grads need skills, not liberal arts,” some say, leading many liberal arts leaders to automatically assume a defensive stance.

The message being sent to today’s college students is that the days of enjoying the college experience and pursuing a major based on personal passions are over. Instead, our young people are steeped in a culture of competition — How many internships can you rack up? Which major yields the highest earning potential? Which field will see the most growth by the time you graduate?

More weight is being placed on the question, “Which industry is most likely to hire me after graduation?” than the arguably more fulfilling inquiry, “What am I passionate about?”

That’s where the quality of a liberal education comes in. As Albert Einstein famously retorted to Thomas Edison’s claim that a college degree is useless, “It is not so very important for a person to learn facts. For that he does not really need a college. He can learn them from books. The value of an education in a liberal arts college is not the learning of many facts but the training of the mind to think something that cannot be learned from textbooks.”

How does a liberal arts college benefit today’s students?

The Association of American Colleges & Universities (AACU) is driving a national advocacy campaign called the Liberal Education & America’s Promise (LEAP). The goal of the campaign is to champion the importance of a 21st Century liberal education, both “for the individual students and for a nation dependent on economic creativity and democratic vitality.”

LEAP defines a liberal education as an approach to learning that “empowers individuals and prepares them to deal with complexity, diversity and change.” By extension, students gain a host of essential learning outcomes that include knowledge of human cultures and the physical and natural worlds; intellectual and practical skills; personal and social responsibility; and integrative and applied learning.

“[A liberal education] provides students with a broad knowledge of the world around them while at the same time allowing in-depth study of a particular area of interest,” explains Ben Greenstein, associate dean at Cornell College. “Students are thus able to adapt to change, address complex multidisciplinary problems and work with people from diverse backgrounds.”

1. The skills of a theoretician

“A person without the analytical, critical thinking skills of a theoretician will never be a leader or an innovator,” asserts Barna Donovan, director of the graduate program in strategic communication at St. Peter’s University in New Jersey.

Discipline-specific skills are important in any field, but Greenstein stresses that there are a variety of important intellectual and practical skills delivered within a liberal education curriculum that are in high demand by employers. “Specific outcomes include the ability to think critically, communicate in both oral and written formats, collaborate with others to solve complex problems and be comfortable with quantitative data,” he says.

2. The ability to rethink assumptions

The professional landscape never stops changing. And try as we may, educational models will never be able to predict the future — so why not prepare students to adapt to those changes in real time?

“The goal of a liberal arts education is to move students beyond facts and opinions to judgment — to increase their doubt, grit, creativity, openness, tolerance for ambiguity and mostly to expand the complexity of their mental models,” suggests Jose Antonio Bowen, president of Goucher College in Baltimore, Md. “Contrary to popular notions, being ‘smart’ is not about how much students know, but about how easily they can absorb new information, rethink their assumptions and change their minds.”

3. The nudge toward innovation

IBM piloted a global CEO survey in 2010 in which it conducted interviews with more than 1,500 CEOs from 60 countries and 33 industries. Most agreed that rigor, discipline, integrity and vision are crucial to maintaining a healthy business model. But the one characteristic they considered more crucial than the rest to successfully navigate an increasingly complex business environment was creativity.

“Leaders are people who can think outside the box, people who change industries, who come up with innovations that create entirely new industries and change the world,” Donovan urges. “They can do so because of the mindset engendered only by a broad, liberal education.”

Liberal arts graduates gain a wealth of knowledge that they’re prepared to apply to a wide range of settings. “They integrate a keen sense of personal and social responsibility into their personal and professional lives,” Greenstein says. “A liberal education fosters an appreciation for human cultures and their interaction with the natural world that allows students to engage with current ‘big questions’ facing humanity.”

Donovan offers this example: In reference to media studies, a technical school in video or film trains students how to format a script, shoot a video and edit the footage. A liberal arts education in mass media and culture, on the other hand, teaches those students to understand the social forces that shaped the media environment they work in. “[They learn] how their films, news stories or music will shape and influence society,” he explains.

5. The opportunity to become what the industry needs

No matter the industry, the professional landscape will always be evolving — especially with our influx of technological advances. “Technology has changed our relationship with knowledge,” Bowen says. “In a knowledge-rich world where every student has access to more knowledge on his or her phone than in any library, the traditional liberal arts values have become more important.”

He explains that the jobs of the future have not yet been invented and these jobs will require information not yet discovered. For that reason, graduating students who can learn on their own are crucial to industry success.

You be the judge: Is a liberal education worth it?

Forbes’ 2014 Corporate Learning Factbook revealed some striking facts: U.S. spending on corporate training grew 15% in 2014, costing more than $70 billion stateside and more than $130 billion worldwide. This is because more than 70 percent of U.S. organizations cite capability gaps among their employees.

“Part of why employers are having to train new hires — even those fresh out of college— is because they require ‘back-to-the-basics’ coaching on the fundamentals such as communication and critical/collaborative thinking,” explains Bill Gerety, CEO of Symplicity Corporation. “We have seen that liberal arts students are often the stronger candidates in that these soft capabilities were weaved into their curricula.”

Our experts agree the value of liberal arts college cannot be understated. To learn more about what makes a liberal education stand out, read 8 fascinating facts you probably didn’t know about The College of St. Scholastica.