Home » About Us » Sentinel Blog » Exciting news for veterans in college: Learn about St. Scholastica’s new Veteran to BS in Nursing program 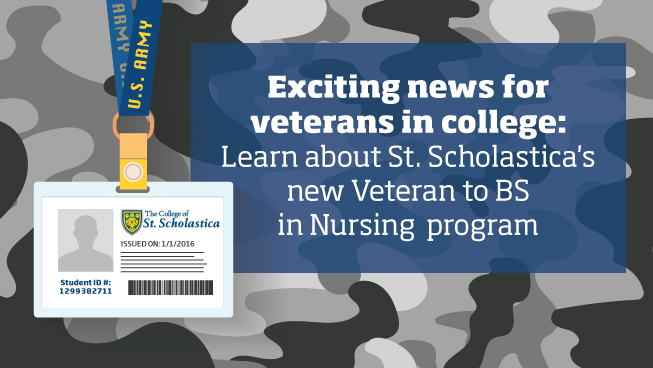 Military veterans face many challenges when transitioning back to civilian life and may become a grossly underrepresented demographic in American higher education institutions.

The College of St. Scholastica (CSS) has long been committed to fostering an educational environment that not only welcomes military veterans, but also allows them to thrive. The College offers veterans a number of services to achieve this goal.

It has been ranked by US News & World Report as a “Best College for Veterans” among Midwest regional universities. It has been designated a military friendly college by G.I. Jobs magazine and has even been listed among the “Top Military Friendly Colleges & Universities” by Military Advanced Education magazine.

CSS is also a member of the Servicemembers Opportunity Colleges (SOC) Consortium, but that’s not all. Read on to learn more about the College’s commitment to veterans in college, including a brand new program for nursing hopefuls!

So what are the existing services that have elevated CSS to military-friendly status and regional rankings?

A major contributor to its on-campus services is the Veterans Resource Center (VRC). Its mission is to provide resources and transition services to current and former military members and their families in a way that promotes the Benedictine values of respect, hospitality and community. The VRC hosts a physical space specifically for veterans, and it also organizes social events for networking opportunities.

CSS also offers a number of support services to help with each facet of your college experience. This includes assistance in maximizing your educational benefits through initiatives like the Yellow Ribbon Program, VOC Rehabilitation and Employment, State Tuition Reimbursement (STR) and several more education benefit programs you can learn about by contacting a CSS representative.

Support services at CSS also include direct access to academic advisers who can guide you through the academic and social transition to college, on-campus counseling services and academic accommodations through the Center for Equal Access.

But one of the most exciting developments for veteran students at CSS is a U.S. Department of Health and Human Services (HRSA) grant for nearly $1 million to train veterans from rural areas who are interested in pursuing nursing careers.

CSS used the grant to launch its new “Veteran to BS in Nursing program.”

The nuts & bolts of the Veteran to BS in Nursing program

The grant gives CSS the opportunity to promote recruitment, enrollment, retention, graduation and job placement for veterans seeking a bachelor’s degree in nursing. “Many veterans return to home base after active duty, and many of those areas are rural,” explains Lt. Col.(Ret) Sue Connor, associate professor of nursing at CSS.

The nearly $1 million grant was awarded to cover institutional expenses for a three-year period, ending in June 2018. “The grant will help get these initiatives grounded to continue into the future,” Connor says. “Sustainability is our goal.”

Three types of students are eligible to participate in the Veteran to BS in Nursing program:

Connor retired from the United States Air Force in 2004, and she was hired as the lead faculty member of the Veteran to BS in Nursing program. Implementing a faculty member with military experience was one of the chief action items recommended with the grant. “Veterans, as with any subculture, tend to speak easier among peers because they speak a common language,” Connor says. “Bringing on a veteran who is a practicing nurse was an effort to help translate things for the students and assist throughout each phase of their transition.”

In addition, CSS has committed to providing all faculty members with more information specific to veteran health relevant to their veteran students.

Another facet that sets this program apart from other nursing programs is the implementation of a close cohort model — based on a platoon model, Connor explains — that promotes bonding among students, increased collaboration and the ability to rely on one another’s strengths. Students are also connected with mentors who are practicing nurses with military experience, and they are offered increased clinical opportunities to expand their skills.

Finally, the Veteran to BS in Nursing program has instilled veteran health into its nursing curriculum. “For instance, in our sophomore class, we’ve given each student a FitBit so they can assess their own wellness (including sleep, diet and exercise), and then consider how those things can lead to poor health and disease,” Connor says. This has been done in partnership with Strong Compass, an initiative of the Duluth Vet Center.

CSS has spent years laying the foundation for quality military and veteran services for its students. And with the HRSA grant, the Veteran to BS in Nursing program is now paving the way to further help veterans transition to life as a student and later as a professional nurse while also addressing the nation’s nursing shortage — an issue even more prominent in rural communities.

If you’re interested in learning more about the transition to college after military service, and how the Veteran to BS in Nursing program can help launch your career, visit this information page.