Home » About Us » Stories » There and Back Again

There and Back Again 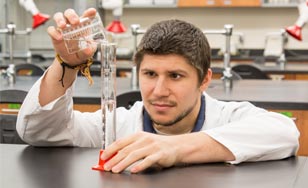 Joe Vuicich’s cancer research takes him from CSS to SC

Some people will go their whole lives without their names appearing alongside the top professionals in their field. But Joe Vuicich ’13 didn’t have to wait that long.

During the summer of 2012, he served as a molecular pharmacology researcher at the Medical University of South Carolina (MUSC). Every day, he conducted experiments and compiled results that would disprove a commonly held theory about how cancer cells obtain energy — occasionally working until 4 a.m. to do it.

Those long nights proved to be worth it. In January 2013, Vuicich was published in the Biophysical Journal as the second author, a feat achieved by none of the other student researchers at MUSC, even those attending Ivy League schools.

And though this project took him all the way to Charleston, S.C., the journey really started years ago in Virginia, Minn.

Vuicich grew up in the heart of the Iron Range, but he knew from a young age that his future lay with vitamins, not minerals.

In high school he shadowed a neighbor who was a pharmacist. That exposure, combined with an interest in physical therapy, led him to St. Scholastica.

“I heard from CSS graduates in the science department that they really enjoyed it, so it seemed like the place to be,” Vuicich said.

A couple of years into his CSS career, he received a letter inviting him to apply for the McNair Scholars program. The federally funded program has successfully prepared many racially underrepresented, first-generation and low-income college students for graduate school and assists with internship and research placements.

“It seemed like a great opportunity for me, so I decided to give it a shot,” he said.

The decision changed his life.

“I wouldn’t have gotten the research position without them, which I thought that was one of the best experiences of my life and very well could have been the reason I got into pharmacy school,” Vuicich said.

That pharmacy school is the College of Pharmacy at the University of Minnesota Duluth, where he began attending after graduating from CSS with a biology degree in 2013.

When he finishes there, he plans on returning to Virginia to be a pharmacist. But he won’t forget his other home.

“I’m happy I went to St. Scholastica,” Vuicich said. “The school and the McNair program opened doors for me that I didn’t think would be open for me when I was growing up.”