Home » About Us » Stories » The Survey Says… 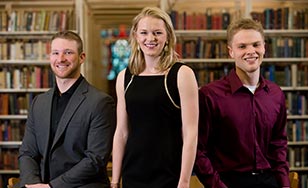 With nine multiple choice questions, developing a survey like the one created by CSS economics students Teddy Glass ‘14, Sam Hoffman ’15 and Kailee Odgen ‘15 sounds like the kind of assignment that most students love. Quick, easy and painless.

“It was pretty tense,” Glass said.

This is the project’s first year, and, apparently, there’s plenty of demand for it.

“There really isn’t a whole lot of data like this for businesses in this region to use, so one of the overarching goals of the project is to bring that data and perspective to businesses,” Hoffman said. “That’ll allow them to see how local economy is functioning – what pieces are flourishing and what pieces aren’t – and use that to more accurately adjust and make judgments.”

Professors Anthony Barrett, Robert Hoffman and Jennifer Pilon – who are CSS’s representatives at the Forum – sent out an email to qualified students. Those interested had to apply, sending a resume and cover letter, and, if selected, interview with them – professional attire and all.

“Everything was so brand new to everybody. We were just given the instructions and told to go, we didn’t really know where to begin” Glass said. “Even our professors didn’t know about the Qualtrics software we had to use to do this.”

Yet the businesses didn’t have to respond, which is why creating a survey with quality questions was so important. And that’s where the tensions came in.

“We argued about the details of the questions a lot,” Glass said. “With our personalities, we all wanted it to be perfect – to be thorough and detailed to ensure we’d get a good response.”

“It’s an interesting experience for me being the only girl working with two other guys,” Odgen said. “I often play the role of devil’s advocate and they could say, ‘well, it’s two against one,’ and go with what they think. But they really tried to understand where I was coming from and we truly made all the decisions as a team.”

Realizing they needed their questions to be broad enough to compare small and large businesses and crafted in a way that the businesses’ identities could be kept secret – a key aspect in today’s highly competitive market – they used qualitative questions to assess things such as hiring patterns, general business activity, capital expenditures, the effects of the Affordable Care Act and factors limiting the availability of certain business components – both six months ago and now.

They indicated that the region’s economy is trending upward and is expected to continue to do so in the coming months – with insufficient demand, competition, weather conditions, shortage of skilled labor and government policy serving as the largest impediments to further growth.

Hoffman even had the chance to discuss these findings on WDSE’s March 28 Almanac North program. This can be viewed at https://www.wdse.org/shows/almanac/watch/almanac-north-mar-28-2014.

Now, Glass, a senior, will attend law school in the fall (though he hasn’t decided where yet). But Odgen and Hoffman will be back to continue the group’s work next year, along with two newcomers.

It won’t be easy.

“I genuinely enjoy spending time with these two. We all get along and are comfortable voicing our opinions,” Hoffman said. “It’ll be tough to top this group next year.”

For more information, view the Forum’s final report (pdf) or view it on the website.