Home » About Us » Stories » The Reel Deal 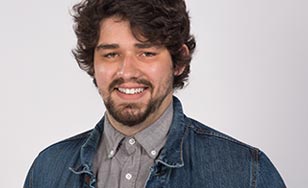 Ever since he was a kid, Collin Goodspeed, ’14, wanted to make movies. In high school, he watched cult classic A Clockwork Orange and was absolutely taken with its stylistic choices. In truth, it inspired a curiosity about everything that goes into creating film.

“I started digging into [Stanley] Kubrick’s movies, the Coen brothers, Martin Scorsese and from there I began studying the minutiae of film,” he said. “I got into scriptwriting, cinematography and other elements; I remember thinking that if I could figure out which elements were being blended together that I could replicate it.”

This love of motion pictures set Goodspeed on a path to The College of St. Scholastica, and the School of Arts and Letters.

For Goodspeed, finding a major to fit his passion took a little time. Like most parents of creative kids, his mother hoped he would be able find a way turn his technical talent into marketable skill.

“When I first came to Scholastica, I remember my mom really wanted me to do computer science since I was good with technology and there were more jobs available in that field,” he said. “It took me a little bit to figure out that my hobbies could dictate what my career would be.”

After some deliberation, Goodspeed chose to double-major in English and Communications with a concentration in film. And with a new focus came some considerable traction.

When it came to his academic progress, Goodspeed was quick to cite many professors and a particular friend — Pat Fischer — who helped unlock a higher standard of excellence.

“I remember [Professor] Ryan Vine had me writing two poems a week; his classes helped me to find my voice,” Goodspeed said. “I think I had six or seven classes with Dr. Nathan Carroll as well — he studies movies in a deep, analytical fashion and it was just fascinating.”

“He [Larson] let us use his cameras and editing equipment and he even pulled off a great performance,” Goodspeed said. “Not only that, but he helped me put together a demo reel, which is a big part of why I landed where I am today.”

Putting it into practice

Now, two years removed from graduation, Goodspeed has found a home in Minneapolis. as a production assistant at ad agency Fallon. There, he’s able to use and refine the skills he built on campus in Duluth to serve national clients like Arby’s, H&R Block and beyond.

“I’m an editor and a cinematographer right now; my day-to-day is either shooting or editing ads,” he said. “It’s a little surreal sometimes that I made it into the advertising world right out of college, but this is a cool industry and it seems right for me.”

Looking back, Goodspeed said he believes his liberal arts experience allowed him the latitude to explore his creative pursuits while offering guidance needed to focus his aim.

“Liberal education at St. Scholastica helped me to construct my identity and artistic voice while teaching me to think critically,” Goodspeed said. “My professors didn’t treat me like a high school student; it was a person-to-person relationship where they helped me grow on my own.”