Home » About Us » Stories » Safe Haven 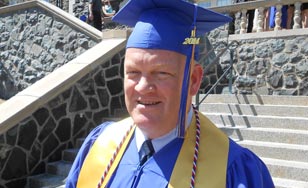 Don Claveau had a lot on his mind in the fall of 2013. He was property managing his house in Alaska, relocating his elderly parents to an assisted-living facility in Duluth, addressing his wife’s health issues, searching for job and trying to graduate with his Master’s in Management. All at once.

But that wasn’t enough to break him…until the accident happened.

On an October afternoon, Claveau’s 12-year-old son, Nick, was playing with a friend in the yard of their home in Cambridge, Minn.

This friend forgot something at his house, so he hopped on his bike and went to go get it. As he began to ascend the hill between their two houses, he turned back to Nick and yelled, “Time me!”

At the bottom of the hill, his friend had been hit by a car. Nick rushed to tell Don and they hurried down to him. But there was nothing they or anyone else could do.

“I broke,” Claveau said. “I couldn’t think, couldn’t concentrate. I didn’t have any idea how to process what I had experienced.”

“How did I get through it?” he said. “Just a lot of support from family, friends and the folks at St. Scholastica.”

After returning from a 23-year stay in Alaska — where he served at Eielson Air Force Base — and earning an associate’s degree from a community college, Claveau found his way back to the very same school where he took guitar lessons when he was growing up in Duluth.

“I knew online and evening programs were offered at other schools, but it never connected with me like it did at St. Scholastica,” he said. “With the veteran friendliness and the flexibility here, it was a perfect fit for an adult student like me.”

Claveau took classes online and on campus in St. Cloud (which was close to his home) and Duluth (which allowed him to spend time with his ailing parents), eventually graduating with a degree in Organizational Behavior in 2012. But he wasn’t done yet.

“The faculty and staff at CSS really went out of their way to express their faith in me and encouraged me to go onto a grad program,” he said. “It was inspiring.”

Claveau turned that inspiration into the pursuit of his Master’s in Management. He progressed through the program until his final semester, when the accident happened.

“The counseling services here were really a safe haven for me to talk and learn about how to deal with the post-traumatic effects of the accident,” he said. “The faculty and my advisors were great and allowed me to get my schoolwork done as I could.”

And eventually he did. In May 2014, he marched down the aisle at commencement, wearing his Air Force uniform under his cap and gown.

“The reputation of CSS, as well as the credentials of the degrees I earned there, impressed the Board of Commissioners who interviewed me and offered me the job,” Claveau said. “The three and a half years I spent at CSS prepared me well for a future I am still in the process of building.”

Both on the job and off.