Home » About Us » Stories » Representative Morrissette 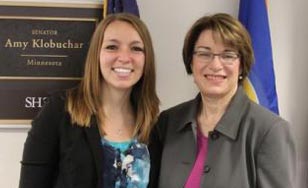 With each state flag Jamie Morrissette passed in the Hart Senate Office Building in Washington, D.C., in April 2015, sweat collected on her palms.

And it kept coming as she reached Minnesota’s for her meeting with Senator Amy Klobuchar.

But when they began talking about health policy and Morrissette’s undergraduate research on domestic abuse, the nerves disappeared.

“We instantly connected on these issues, which was exciting,” she said.

This ability to connect with a Senator didn’t surprise her.

“In the McNair Scholars program at CSS we do so many things to prepare us for speaking to people higher up in our fields. I had a lot of practice.”

The McNair program did much more than that. It helped bring her to Capitol Hill in the first place.

Getting there with McNair

The aim of this federally-funded program is to prepare racially underrepresented, first-generation and low-income college students for graduate school. And together with S-STEM — a program for students interested in careers in science, technology, engineering and math (S.T.E.M.) — Morrissette had a number of experiences that pointed her to the right field for her: medicine.

Yet that was far from the only discovery she made at CSS.

Once she arrived, she took part in the Multicultural Leadership Orientation and joined all of the cultural clubs on campus.

“It all seemed very out of character for me at the time, but now that is my character,” she said. “I developed a real passion for social justice here and became interested in how race and culture affect your life and your healthcare.”

Thanks to McNair she was able to put this passion into practice.

During the spring of her junior year, the program helped Morrissette find a summer research position at the Center for Health Equity at the University of Minnesota. There she worked with her mentor on some unprecedented research.

“We found that there is a correlation between domestic abuse and cardiovascular disease, which is something that has never really been found before.”

These results earned Morrissette trips across the country to present her research. One such trip was to Posters on the Hill, an annual event on Capitol Hill where students present their research to legislators and other federal employees.

Fewer than 100 students from around the nation were chosen to present. Morrissette was one of only two from Minnesota, and she took the opportunity to meet with Senator Klobuchar and an aide to Rep. Tom Emmer.

And if Morrissette has it her way, she’ll be having these sorts of one-on-one healthcare discussions for the rest of her career…with her patients.

After graduating in May 2015, Morrissette is working as a certified nursing assistant while she applies to medical schools and physician’s assistant programs, with the goal of one day serving as a primary care provider in an underserved region.

“Finding that niche is a hard thing,” Morrissette said. “But by taking advantage of the full spectrum of experiences CSS has to offer and trying new things, I’ve done it here.”