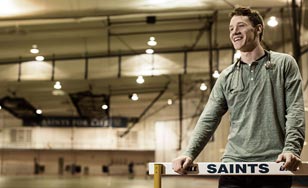 At The College of St. Scholastica, we are guided by the Catholic Benedictine values of community, hospitality, respect, stewardship and the love of learning. For recent graduate Christopher Doran, stewardship was a strong focus during his time at CSS, and will follow him throughout his life. “I was given this body, and someday, I’m going to have to give it back,” said Doran. “I’m just a caretaker of it.”

Heavily involved in the community and school, Doran lived his values at CSS through:

“I have a purpose in my life and I’m to fill it through service, through nursing, through caring for other people. If I do that, I believe I’ll be a good steward of my body.”