Home » About Us » Stories » Off The Street 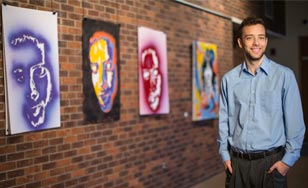 Duluth doesn’t have nearly as much graffiti as many other urban areas across the country. But where most citizens see this as a relief, Willie Brakke sees it as an opportunity.

No, he’s not out spray-painting his way across downtown Duluth. He’s creating his own unique take on street art as part of his capstone project for his art minor here at St. Scholastica.

But unlike many street artists, Brakke’s approach doesn’t involve anything illegal. He starts with a picture or image he wants to base a piece on, projects that onto paper, draws it, uses that as a basis for a stencil, cuts out different layers for each of the different colors, and spray-paints it on to a piece of canvas, plywood or cardstock.

“I got the idea from an art history class with Sarah Brokke Erickson,” Brakke said. “The last artists we studied were street artists like Banksy. I thought it was cool so I tried making t-shirts and from there decided to make it into my capstone project.”

Combining the techniques they learned in their early art classes with the their own unique styles honed in later ones, these capstone projects allow students to create works that truly express their personal artistic development — growth is spurred by professors like Erickson and Po-Lin Kosuth.

“A lot of art teachers love art and love teaching about art, but they don’t really know how to explain how to improve,” Brakke said. “Po-Lin is really good at that — able to instruct you on how be better without being overbearing.”

And they do more than help artists improve their work. They teach them how to get it seen — instructing them on how to sell their art, set up shows and talk about their pieces.

Apparently that’s working, as Brakke’s project will be featured at VIP Pizza in Superior, Wis., after he returns from Ireland, where he’s studying this semester.

After he graduates with a psychology degree in spring 2014, he wants to participate in a yearlong fellowship at the nonprofit Students Today Leaders Forever.

But he won’t be too far from his cans of spray paint, as he sees the capstone as a springboard for his future artistic endeavors. And to the delight of police officers everywhere, it’ll still be on canvas…for now.