Number 1, where it counts 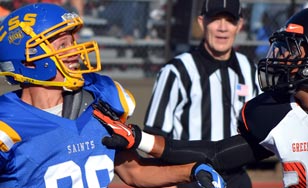 Football, like every sport, is a numbers game. The team that scores more points wins more games and, ultimately, celebrates more titles.

By that standard, there’s a lot of hooting and hollering going on in the College of St. Scholastica Saints’ locker room. In just five years, Coach Greg Carlson has taken the school from no program to one to be reckoned with.

In 2008, the team’s inaugural season in the Upper Midwest Athletic Conference (UMAC), the Saints won one game, going 1-7. But by 2011, the team went undefeated during the regular season, losing in the play-offs to the College of St. Thomas, a perennial powerhouse in Division III ball.

The Saints came back strong in 2012, going 7-1 in conference play, and again, making it into the first round of the play-offs.

Yet, as good as those numbers are, there are others that light up this seasoned coach even more. Especially when you consider that few, if any, of his athletes at this level, will go on to play pro ball:

“Our goal is 3.0,” says Team Co-Captain Keaton Rush. “We’ve never made it, but we’re getting there.”

Well, first off, because St. Scholastica academics are so demanding, the coach only recruits players who can compete in the classroom, too.

Second, the team gives each player a study guide – called, playfully enough, the Academic Game Plan – a binder that helps them get and stay organized.

Third, the team organizes study groups – called Study Tables – that kick in whenever a player’s GPA dips below 2.5.

And, fourth, Carlson emphasizes academics so much that his assistant coaches spot check the players, making sure they’re in class.

Carlson harnesses something else in his ongoing campaign to keep academics first – his guys’ competitiveness.

He challenges each of the positions – like the linebackers, running backs, wide receivers, etc. – to compete against each other for the best collective GPA.

“We do it simply for bragging rights,” the coach says. “But you’d be surprised how serious these guys get about it.”

The coach also gives a shout out, after each semester, to the 10 players with the best GPAs. One by one, in a team meeting, he has them stand for a round of applause.

“I’m not a spotlight kind of guy,” says Co-Captain Cory Gebhard. “But my mom and dad certainly appreciated the letter that Coach sent them.”

But back to those all-important numbers. Here’s a few more that touch a coach who’s resume includes stops at higher levels – including Division I and even pro ball:

“I give real credit to those kids,” the coach says. “They believed in the program. They bought into the system. We call them the pioneers. But, really, they were the survivors. They put St. Scholastica football on the national map.”