Home » About Us » Stories » Moving on Up 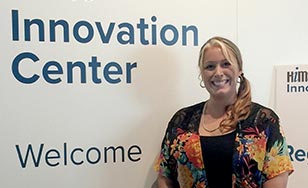 Joy Selleck is a mover. Growing up, she crisscrossed the country, living in seven different states. During her undergraduate years, she spent time at two different colleges before graduating from St. Scholastica. And now that she’s into her career, this movement has continued.

Recently, Selleck has been promoted not once, but twice – first to Senior Information Systems Coordinator, then to ACO Information Systems & Data Analytics Manager at Mercy Accountable Care Organization in Des Moines, Iowa — positions that were created just for her.”

For that, she thanks her decision to return to St. Scholastica to pursue her joint master’s degree in Health Information Management (HIM) and IT Leadership.

“My boss mentioned that my returning to school to get my master’s factored into my promotion and will likely be a stepping stone for further career advancement,” Selleck said.

And while that was certainly a desired outcome, it wasn’t the driving force behind her decision to continue her education. As the HIM field grew and professional roles expanded, Selleck was looking to supplement her education with a master’s degree that combined HIM and IT, two fields of critical importance to the healthcare industry.

There was only one place she considered — St. Scholastica.

“I had such an incredible experience finishing my undergraduate degree there (also in HIM),” she said. “I wouldn’t have gone anywhere else.”

She hasn’t been disappointed.

“I have attended on-campus and online classes at three different colleges and I feel more a part of the CSS community than I did at any other school, even though the program is online,” Selleck said.

“I am able to take what I am learning and apply it in real-time in my daily work. The value of the content and the courses is very clear to me, especially now.”