Home » About Us » Stories » Let it Shine 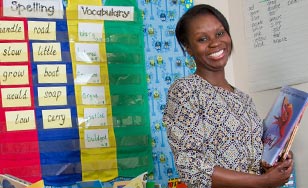 Graduate Teaching Licensure (GTL) alum Jebeh Edmunds is a powerhouse. From the moment of her birth — in Liberia, amongst the destruction and ruin of civil war — to her family’s emigration to the United States (age 2), and her subsequent pursuit of naturalized citizenship, Edmunds’ journey has forged her heart for life-long activism.

Whether by setting up donation banks to combat Ebola, driving African and African-American awareness initiatives (Celebrate Africa, Kwanzaa, Juneteenth and more) or volunteering to support her son’s hockey team, she — as a standard, not an occasional exception — sees needs and is compelled to meet them.

“I have quite a few aunts who teach at schools in Liberia, and we go all over town collecting books to send over; books that would usually get recycled or end up in a dump,” she said. “I want to show my kids how blessed we are […] we always give back.”

It was in this spirit that Edmunds began as Director of the African American Cultural Center in the Duluth Public Schools back in 2004, raising cultural awareness in a district with a relatively small minority population.

After working in the district for a number of years, Edmunds was inspired to pursue her teaching license. One problem: she was working full time and had recently given birth to her first son, Max. She needed a program that would accommodate her family, and she found it at St. Scholastica.

With weekend classes and a robust online platform, the GTL program was a natural fit. Edmunds said the support and overall structure was ideal for people in her shoes — working full time, but desiring licensure or a Master of Education (M.Ed.) degree.

“One of the unique things about the GTL program was that everyone had a ‘life’ outside class; it was a shorter amount of time [than undergrad], but we all had much more at stake. It was a great community,” she said. “The professors were such a big support. They took care of all the student-teaching placements, and I still have a relationship with my professors today.”

Edmunds said that because GTL credits count toward a master’s degree, she was able to graduate in May 2015 with her MS in Teaching.

“We were given seven years from the time we started the program to finish our master’s,” Edmunds said. “I had two years left, and my husband said ‘Go ahead and finish it.’ It was literally two classes and a capstone after the GTL.”

Plus, she co-writes a blog with close friend Dr. Jennifer Reierson at “Mommies In Black and White”.

“My writing partner and I needed an outlet where we could have conversation around cultural competency, diversity and race,” Edmunds said. “We don’t want to be divisive or call people out; we just want to discuss difficult topics.”

Now armed with a master’s degree and tenure in the Duluth Public School District, Edmunds has a sense of stability, but not of satisfaction. She wants to speak at the international TED conference (she participated in TED at Teatro in 2015). Maybe write children’s books. And crown her scholastic journey with a doctoral degree.

“It’s my hope and dream to get my PhD in education,” she said. “At the graduation ceremony where I received my master’s, I told my husband ‘I want that [doctoral] hood.’”

With her record of achievement, it wouldn’t be a surprise.