Home » About Us » Stories » Leading by example

The most powerful examples of leadership are found in the quiet, everyday acts that inspire others to live up to their greatest potential. After all, it takes courage to move away from your home and family in search of opportunity, and to reach outside of your comfort zone to make new friends.

That’s exactly what Jason Chavez-Cruz ’18 has done. And as he’s blazed new trails for himself and his family, he personifies a positive trend in the recruitment and retention of Latinx students that is making the campus a more diverse and welcoming place.

Jason’s success at St. Scholastica inspired five of his relatives – many of whom attended Cristo Rey Jesuit High School in Minneapolis with him – to enroll as well. They include his brother, Bryan Chavez-Cruz, and cousins Josue Chino-Cruz, Allen Cruz, Lidia Angeles-Cruz and Chantell “Chanty” Armijo-Cruz.

It was a leap to come all the way north to Duluth from the Twin Cities area and Cristo Rey, where Latinx students are in the majority.

Chris Davila, director of the Office of Equity, Diversity and Inclusion, said that just a few years ago, Latinx students represented one of the smallest minority populations on campus. In contrast, today Latinx students are the largest minority group at St. Scholastica, with a first-year retention rate higher than the average student.

“The increase in Latinx students has coincided with the Cruz family attending CSS,” Davila said. “Not only are family members attending CSS, but other classmates from Cristo Rey High School are attending as well. They are finding a community here that is supportive of their specific needs and a community they can relate to on a variety of levels.”

“We are thankful to see the example of the Chavez-Cruz extended family,” said President Colette Geary. “Their flourishing reflects our commitment to inclusive excellence and building a diverse and welcoming community.”

Jason and his family, with the support and encouragement of Davila and his Student Affairs colleagues, have made a significant impact on campus. They’ve become leaders in social justice clubs and served on Student Senate, where they have helped to galvanize efforts like the Swipe Out Hunger program, through which students can donate their unused meals to fellow students experiencing food insecurity, and the Professional Clothing Closet, which gathers donated gently used clothing items for students to use in job interviews.

Jason also served as student body president during his senior year. “The influence that this family has had on St. Scholastica is going to continue beyond the years of them being here,” Davila said. 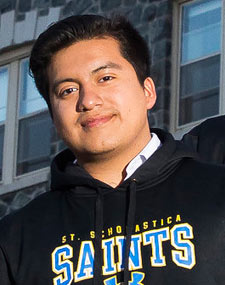 Jason, a double major in social work and organizational behavior, chose St. Scholastica because of the campus focus on social justice.

As a freshman, Jason found a warm welcome at St. Scholastica. The Multicultural Leadership Orientation, which provides participating first year students with a chance to move in early to meet classmates and learn about Duluth, was particularly helpful, he said.

He also felt at home right away in the Center for Just Living, a gathering space in the Student Union for social justice-minded students.

“You can just go there and be yourself, and talk about things you actually care about,” Jason said.

Still, the transition wasn’t always perfect, and Jason faced some struggles during his freshman year. At times, he even considered dropping out of school. But that changed when he learned that his brother and his cousins Josue Chino-Cruz and Allen Cruz were planning on coming to St. Scholastica. He embraced his role as a leader for his family.

“I had to get myself together,” Jason said.

He immersed himself in campus activities, serving as a resident advisor and as president of the Student Senate, Justice Together and the Latino Student Union (LSU).

Jason graduated in May and got a job working for the Minneapolis City Council. His career goal is to bring about social change through public policy.

“I just want to make life a lot easier for people that have been through the same path as myself and my family,” said Jason. “I want to change policies that affect people’s lives.”

Most of all, he hopes to improve his parents’ lives.

“We don’t come from a lot of money, but I want to provide for them eventually because with the little that we’ve had, they always make sure that it feels like we have a lot.” 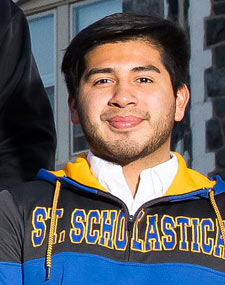 “My father and my mother have always worked hard for me, and they want my dreams to come true,” said Bryan ’19, an accounting/finance major. “Having their support really motivates me. I want to provide for them in the future.”

Like his brother, Bryan became heavily involved in campus life, joining the soccer team and eventually becoming the student representative on the Board of Trustees.

“I’ve had a lot of opportunities here,” he said, listing campus TRIO programs and the Office of Equity, Diversity and Inclusion as key support systems. A TRIO trip to Washington, D.C. to tour graduate schools was particularly motivational, he said.

All in all, he said, at St. Scholastica he’s found a place that respects diversity while also offering students a chance to experience a fresh perspective.

“At Cristo Rey, 95 percent of people looked just like me,” Bryan said. “I wasn’t really out there in the world understanding why people think other ways until I came here to St. Scholastica.”

Bryan and Jason’s cousins Allen and Josue arrived on campus at the same time as Bryan. 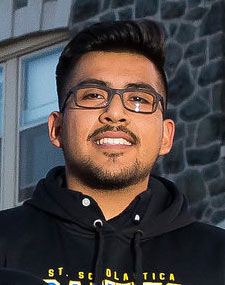 Allen Cruz ’19 is a biochem major who had struggled academically at times in high school. He’s now a poised, confident student leader who serves as a teaching assistant in anatomy and physiology courses, and is involved in the LSU, the International Club and Student Senate.

“I want to keep on improving. I know I can do better,” Allen said. Campus support systems coupled with his discipline and work ethic have helped to make him a model student. He has taken advantage of TRIO’s Student Support Services, as well as the Academic Plus program, which helps freshmen establish strong academic habits. The relatively new program is already paying dividends by boosting the retention rates of participating students.

Allen also finds strong support from the faculty. “The professors here are really here for the students, so that’s something that is really great about Scholastica,” he said. 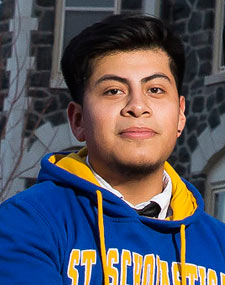 Josue Chino-Cruz ’19, a psychology/social work major, had a similar experience with campus resources. His freshman year was uncomfortable at times because he sometimes felt like an outsider.

He sought guidance from Chris, who encouraged him to get involved and to take advantage of academic services.

“Chris would tell me, ‘you need to open up and ask for support,’” Josue said. “That’s what I did and it really helped.”

He utilized the campus Writing Center and Tutoring Center, and became involved with Student Senate, the LSU, the International Club and Justice Together.

“I really met a lot of people there and felt like I belonged,” Josue said. 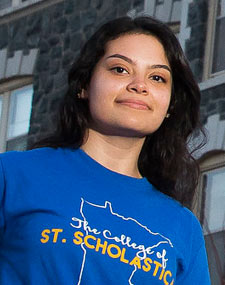 The next cousin to become a St. Scholastica Saint was social work major Lidia Angeles-Cruz ’20. Struck by the cultural differences between Duluth and the Twin Cities area, she received some great advice from Coordinator of Multicultural Student Success Sarah Stewart.

“She told me that you shouldn’t try making Duluth the Cities,” Lidia said. “You should find things that you enjoy in Duluth that you wouldn’t do in the Cities.”

Sarah has been an important supporter, Lidia said.

“She’s been very helpful,” she said. “She’s been there for me and my family too.” Lidia recently became Student Activities Chair for the Student Senate. 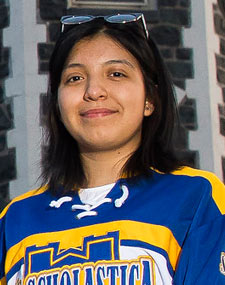 The freshman of the group is Chanty Armijo-Cruz ’21, a social work/biology major. She became familiar with St. Scholastica through her own visits to campus.

“I would come and model the quinceañera dresses,” she said. “I would do traditional Mexican dances here for LSU. I started feeling how welcoming the environment was.” She also took part in the Youth Theology Institute, a spiritual and vocational retreat for high school students. “I stayed here for two weeks in the summer, and I really loved it here.”

Even as a freshman, Chanty has already embraced a number of leadership roles. She is on the executive board for LSU, she’s the vice president of Diversity and Inclusion on the Student Senate, and she is one of the managers of the Professional Clothing Closet, and she is an events coordinator for the Student Union.