Home » About Us » Stories » Hitting the Jackpot! 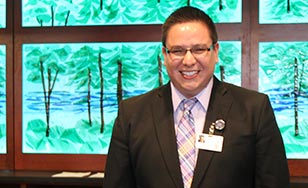 Dustin Goslin’s MAM degree helps him rack up the achievements

Even before he landed his current job as Vice President of Hotel/Retail/Resorts for Grand Casino Mille Lacs, Dustin Goslin had an impressive career.

He’s been the Chief Operating Officer of Indian Health Services (a division of the Department of Health and Human Services), the general manager of two different hotels, an official for the City of Waite Park, Minn. He was even the St. Cloud Times “Featured Young Professional” in September 2010.

All before the age of 30. His secret?

“Without my time at CSS I would not be as successful as I am now. Period.”

Despite this, Goslin never expected his Master of Arts in Management (MAM) degree to change his life like this.

“Going into the program, I had one goal – to graduate and have a piece of paper that would allow me to earn a higher wage,” Goslin said.

He got much more than that.

“The courses really ignited a passion in me, and finally after years of trying to figure out what I wanted to do when I grew up, I knew exactly what I wanted to do,” Goslin said. “I wanted to lead a team, be successful and make my mark professionally by driving that success into an organization.”

And he didn’t have to wait until he got out of school to do it.

As a part of his concentration in Organizational Development at the St. Cloud campus, Goslin had the opportunity to research his employer at the time – Hilton – for a project in class.

But it didn’t stay there. In addition to a good grade, Goslin’s project helped his hotel earn a ranking in the top 10 percent of all the Hilton-branded hotels in the country on customer satisfaction surveys.

The practicality didn’t end there. At CSS, Goslin also conducted a study on American Indian leadership styles and how they differed from mainstream American business leadership – an exercise that taught him more about his personality and how his Native American heritage influences his leadership style.

“The education I received at CSS gave me the tools to succeed in all of the different roles I have had and has allowed me to rise to the top in a company that generates millions of dollars a year and is the largest employer in East-central Minnesota,” Goslin said.

Not a bad achievement to add to the list.