Home » About Us » Stories » Going His Own Way

Going His Own Way 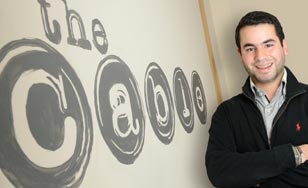 “I wanted to start from zero, to be self-made,” he said.

And so, thanks to the recommendation of his family in the Twin Cities, a visit from Tom Homan, Director of the Office of International Education at CSS, and a scholarship that covers most of his expenses, Al decided to make the 4,000-mile journey to St. Scholastica.

Acclimation by dedication
While getting to CSS was relatively straightforward, there still was an adjustment period.

He had to get used to differences in personal space — shaking hands instead of kissing friends on the cheek — and food — eating a smaller lunch and a big dinner instead of the other way around — and learn a new language, not English, but American slang.

But these adjustments were not solely cultural.

“During my first year, I took it easy. I wasn’t doing much, just living the college experience, and I was very average,” Hernandez-Feris said. “Then I started to realize this wasn’t going to get me anywhere, so I put my feet on the ground and started working harder.”

He found jobs in the marketing department and the Office of International Programs at CSS, became the manager of the Cable student newspaper and started the Entrepreneurship Club on campus. And in the process, the junior marketing management major has become a fixture on the Dean’s List.

And, according to Hernandez-Feris, this hard work is a requirement for all international students.

“International students have to try harder because we have to maintain our scholarships to stay after college,” he said. “We can’t just quit and go work somewhere around here. Success is our only option.”

The next step
Hernandez-Feris’ options for after graduation are wide open. Ideally, he’d like to stay in the U.S., work for two years, go to graduate school — maybe get his MBA, maybe do something in human resources — and eventually start his own business after he acquires more experience.

But even if it doesn’t work out that way, he won’t fret.

“I just want to learn as much as I can,” he said. “At this point, I’m not that worried about money, my future or my job. If it’s not here, it’ll be somewhere else.”

With an attitude like this, is there anything he can’t adapt to?

“I don’t think I’ll ever get used to the cold.”