Home » About Us » Stories » From College Street to Wall Street

From College Street to Wall Street 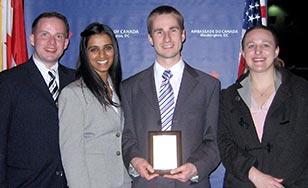 Evgeny Krasnov passes through CSS on the way to a law career in New York.

For many students, moving to New York City immediately after graduating may be a harsh transition. But when, four years earlier, you made the move from Russia to Duluth, it’s not too bad…especially when you spent the time between at St. Scholastica.

“I met people from around the world at CSS and became acquainted with wildly differing perspectives and cultural preferences,” said Evgeny Krasnov, a 2010 graduate of CSS’s Language and International Studies (LIS – now called “Global, Cultural and Language Studies”) program. “This radically expanded my horizons, and you simply can’t be a closed-minded person and thrive in New York City.”

Krasnov moved to the sprawling and completely unfamiliar metropolis to study international law at the Hofstra University School of Law. And though the academics were rigorous, he was well prepared.

“I’m very pleased with both the depth and breadth of my education at CSS,” Krasnov said. “The faculty are top-notch experts who are also relatable, down-to-earth people and the intimate environment and community of CSS are really conducive to individual development.”

This development was a driving force behind his success in law school. In fact, his article on the Americans’ right to adequate food – which was published in the February issue of the Hofstra Law Review – stemmed from an interest in food policy that he developed from a series of Peace and Justice lectures at CSS.

But despite this success, he managed to stay balanced – studying hard while being involved in student organizations, playing club soccer, going to off-campus events and having fun.

“Because every part of student life at CSS is so connected – the classes, athletics, clubs, dorms, school events – it really taught me to balance my time to make the most of my college experience,” he said. “I am certain that, without that sense of balance, I wouldn’t have done as well in law school.”

Now he’s applying these balancing skills as an Associate at Attorneys-At-Law Borenius – a Finnish law firm on Wall Street.

“I’m very glad I went to CSS,” Krasnov said. “It’s amazing how much closer it brought the world to me. I formed into a well-rounded individual and a thinking citizen at CSS. And for that, I’ll be forever grateful.”