Home » About Us » Stories » Finding my voice 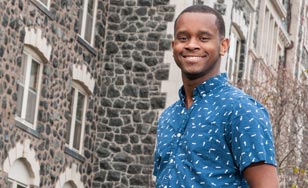 When given the opportunity to share my story, I was hesitant because I was afraid of people’s reactions. That’s something I’ve struggled with my entire life as a black, gay man. My college experience has been a beautiful journey, but certainly not without challenges. Now, as a senior here at The College of St. Scholastica, I feel proud and confident of who I am. So, this is my story.

My father is a felon; my mother is a single parent who had me when she was 18. My father never went to college, and my mother only attended for a year. I grew up in areas that were at times dangerous — some might call it “the hood.”

Very early on, I was aware of my sexuality, but I kept it extremely secret — you don’t come out if you’re black, you just don’t. I always wanted to outperform everyone. Friends, family, strangers — “competitive” was my middle name.

I was not satisfied with being a statistic. Numbers told me that I was destined for prison, teenage fatherhood, drugs and gang affiliation, simply based on who I was and the color of my skin. When I turned on the T.V., the world kept telling me that people like myself were failures, thugs or whatever ugly name you choose. I wholeheartedly rejected that idea with intense anger.

So, I proved everyone wrong. I went to high school and met the love of my life, won first place in a prestigious essay competition and started to write my own novel.

Early on at CSS, I didn’t want individuals to see me for who I was, so I laid low. My belief was that if I kept my head down and did what I had to do, everything would fall into place. I learned how to silence my mouth no matter if I was offended or hurt.

Here at this amazing institution, I met people like Dr. Heather Bastian (former English faculty member), Tressa Erickson (former recruitment/retention coordinator) and Megan Perry-Spears (dean of students) who really pushed me to deep depths. They taught me true grit and helped me to find my voice.

I’ve done things I never thought humanly possible at this college. I presented my novel as a part of McNair Scholars, produced a concert event, created a podcast, became a student blogger, participated in social justice events on campus, became a campus representative and a tutor at the Rose Warner Writing Center, and much more. My sights are now locked on applying to graduate school and doing musical projects next summer.

God has given me the confidence to be who I am, and now this gay black kid from “the hood” with a felon father and a single parent mother is proving the statistics wrong.