Home » About Us » Stories » Faith Journey 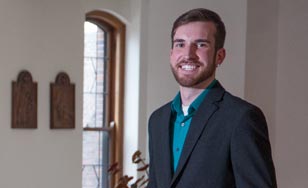 Sam Burns ’17 grew up Catholic, but like many students who attend college, he began to question the family tradition that was passed on to him when presented with a world of new ideas.

“I think questioning faith tradition is a crossroads where you either move away from it, or dive in deeper,” Burns said. “I dove in deeper.”

As Burns explored a potential major, he found that Social Work would afford him the opportunity to help people through the most difficult times in their lives. With his sister and cousins as examples in the nonprofit realm, he forged ahead in study and began to understand the overwhelming need.

Burns began to appreciate the passion St. Scholastica faculty had for empowering the oppressed.

“I loved learning about the history of social work being taught at St. Scholastica,” he said. “There is such an incredible commitment to teaching students how to assist marginalized people.”

“Seeing and hearing stories from faculty really helped me see this as a true career path. Whether you’re working one-on-one, or with couples and families, you’re seeing lives change.”

With this mindset, it’s no wonder he was able to land an incredible post-graduate opportunity.

Burns kept in touch with Father William Graham, who served as director of Catholic studies at St. Scholastica, after taking one of his courses freshman year. In their communications, Burns remembers Father Graham suggesting he consider the Benedictine Volunteer Corps — a yearlong monastic experience usually reserved for St. John’s University graduates. Benedictine Volunteer Corps (BVC) has sent 170 men to 21 Benedictine monasteries around the world since its inception in 2003.

“At the beginning of this year, I really didn’t know what I was going to do after graduation,” Burns said. “I met up with Father Graham this past January, and he said if I had interest, he could shoot [BVC founder] Brother Paul Richards an email.”

“After a formal interview, I received a call the same night saying that I was accepted, and that I had been assigned to serve in Israel.”

Located on the shores of the Sea of Galilee, Tabgha Monastery is the place Burns will call home. There, he’ll share in common life with the monks and support the work of creating positive change in the surrounding community.

“The monks we will be living with are German monks, and among other things, we’ll be serving at a home that they run for developmentally disabled Palestinian and Jewish children,” Burns said. “I think it’s an amazing thing to help kids whose faith traditions are different than my own.”

Burns is serious about attending graduate school after his time in Israel, but he’s not yet settled on where he’ll attend. He’s happy to take some time and make the right decision.

“I’m not sure if I’ll want to teach or what I’ll want to pursue once this time overseas is complete,” he said.

As he looks back on his time at St. Scholastica, Burns is grateful for his own trajectory — he never really saw all of this coming.

“Something I appreciated was that we were encouraged to question and sort of ‘spar’ intellectually,” he said. “I was challenged to face the questions I have and be open to learning new ways of approaching issues I thought I knew about in full. It’s definitely taken me to places I didn’t expect when I started.”