Home » About Us » Stories » Coordinating COVID

In November 2020, COVID-19 case counts were steadily increasing across the country. Schools were transitioning to distance learning, workplaces were contemplating shutdowns and hospitalizations had reached their highest point since the start of the pandemic.

Closer to home, the College had just announced that in-person classes would shift to online after the Thanksgiving break. As the community braced for more uncertainty, Collins was making the drive from her hometown of Fort Worth, Texas to begin a new role: COVID Coordinator at The College of St. Scholastica.

Collins had actually applied for another role at the College, but when she learned that position would be put on hold, she was presented with an alternative. Elliott Johnston, director of residential life, encouraged her to apply for the COVID Coordinator role instead. Collins had recently left her job at Tulane University because the pandemic had shut down much of the school’s operations; now the pandemic was presenting a new opportunity. And she decided to pursue it.

The need for human connection

The transition posed some challenges.

Collins had never been to Minnesota before, and never experienced snow. Among her first purchases as a Duluthian: a new coat. And her take on winter? “It wasn’t as bad as I thought it would be,” she laughed. “But it wasn’t as fun as I thought it’d be either.”

Then there was the work itself. As the COVID Coordinator, Collins reached out to students at an incredibly vulnerable time: right as they were preparing to enter quarantine and isolation on the College’s campus. She outlined what to expect and ensured their questions were answered as they prepared for time away from friends and instructors. Once the students were in quarantine/isolation, Collins was often their sole point of contact. Outfitted in full PPE, she brought homework, mail or other items that were left behind in dorms and dropped off care packages from family members who were prohibited from in-person visits.

She acted as the liaison for everything they needed, including human connection.

“It was really about making sure they felt supported,” she said. “Every day, I was making contact with students. Sometimes it was just going for a walk or talking, whatever it took to make them feel connected.”

Collins lived on-campus and worked 24/7, even fielding requests at 3 a.m. to care for and support the College’s students.

Johnston described her efforts as heroic. “Being that this was a new role that none of us really had any experience in, Bianca was a champ and jumped right into it,” he said. “She was such a hard and excellent worker; managing strong personalities and building trust with a lot of grace.”

And, he noted, her commitment never faltered. “She worked 50 straight days in a row. Not all were eight hour days, some were less, some were longer, but every day she worked and she never once complained.”

“Honestly, it was hard being the only person doing it,” she said. “I definitely had to learn not to take on the students’ problems as my own. Eventually, I realized it was still possible to be there for them, make them feel supported and take time for myself, too.”

In May 2021, Collins made another transition, this time, to the role of area coordinator, the same position she had initially applied for in 2020. Here, she supervises residential advisors and manages the campus’ seven apartment buildings. 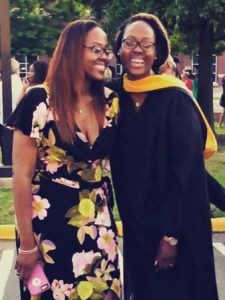 And when this work feels draining, as it sometimes does, Collins has an amazing support system in her twin sister Briana. Both attended Philander Smith, a historically black college in Little Rock, Arkansas. Both pursued degrees in psychology, held internships with the school’s athletic teams (Bianca oversaw the women’s teams; Briana: the men’s) and earned graduate degrees in college student personnel from Arkansas State. And unsurprisingly, both hold the exact same role as area coordinator for their respective institutions. The two talk on the phone every day.

Although Collins is no longer in a COVID support role, she still enjoys being a source of support for her students.

“My favorite part of the job is supervising the RAs and trying to make sure they understand that they’re students first, and then employees,” she said. “I just want to make sure they’re taken care of, in a sense.”