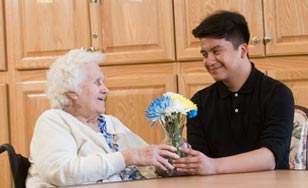 “You don’t have to go back to school.”

“Why don’t you just stay here?”

“When are you coming back?”

These are just a few of the things that the students of Myers-Wilkins Elementary School say to Jason Chavez when he leaves their classroom.

“Hearing that makes me want to keep going back and back and back, even when school work is piling up,” Chavez said. “It makes me happy to know that they’re happy.”

And with the amount he has volunteered, he’s had that feeling a lot. During the school year he spent six hours a week (sometimes more when he wasn’t overloaded with schoolwork) at the school tutoring, mentoring and reading to the kids there. Before that, he volunteered at Regions Hospital in St. Paul, where he delivered flowers to patients.

In fact, his contributions were so great that he was recently recognized by the Duluth News Tribune for his volunteer work.

“My parents have always told me to help people out,” he said. “I can’t really give money, so I give my time.”

But volunteering isn’t his only connection to home.

“CSS actually reminds me a lot of my high school,” Chavez said.

And after hearing the recommendations of a few people from his high school who came to CSS and received generous scholarship packages that made it affordable, Chavez decided to give it a shot.

Soon after, when he completed CSS’s Multicultural Leadership Orientation — a weeklong workshop that hones students’ leadership skills and helps them adapt to life on campus — he was glad he did.

“Right away I had that sense of feeling at home,” Chavez said.

This feeling was enhanced a couple of weeks into school, when he joined a number of clubs — including Latino Student Union, Muslim Student Association (serving as a the freshman representative for both) and the International Club (where he’ll serve as vice president next year) — that have helped him recognize the school’s greatest asset.

“I love the people here,” he said. “No one I’ve met so far is judgmental. They’re just cool and nice.”

As Chavez prepares for his sophomore year, he’s working to turn his volunteer experience into a future career in pediatric nursing. And he’s glad he’s doing it at CSS.

“It’s not what I expected, and I like that about it.”