Home » About Us » Stories » A Creative Process 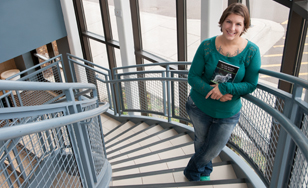 Moriah Erickson switched majors at CSS after discovering and developing her talent for writing poetry. As a poet, she is a believer in brevity.

“I want to tell a story in as few words as possible and still have them be meaningful.”

So it’s no surprise that when she’s asked to describe her CSS experience, it only takes her one word.

But her journey to CSS started with a very different word — polysomnography.

Armed with a degree in respiratory therapy from a technical school, Erickson moved to Duluth in 2005 and found a job as a polysomnography technician — setting up and facilitating sleep studies for a local hospital.

She knew she still wanted to get her bachelor’s degree. To do it, she required a program that would allow her to maintain a busy life that included motherhood, full-time work and even the occasional half-marathon.

“I looked at a couple options and ultimately decided I wanted to become an advanced practice nurse and CSS’ program had a fabulous reputation.”

Yet after a semester here, it wasn’t the chemistry or biology that stood out to her.

“The liberal arts nature of CSS drew me from nursing to my true love, the written word,” Erickson said. “I likely would have never been encouraged to switch majors at a more technical school, but CSS really pays attention to students and recognizes their passions.”

This passion led her to become an English major, where she took classes that exposed her to a variety of subjects — like religion, politics and art — and opened her mind to new skills, ideas and ways of thinking.

But that wasn’t the most important thing she developed.

“CSS helped foster my love of and confidence in my own writing,” Erickson said. “Without CSS, my degree, and the confidence I got through those things, I would never have had the guts to put anything I wrote out there.”

And now, Erickson supports her budding career in poetry with continued work in polysomnography. In fact, her first full-length poetry collection, In The Mouth of The Wolf, was published by Kelsay Books in October, 2015.

Many of the poems in the book deal with relationships, family and memories — three things she experienced in abundance at CSS.

“What kept me at CSS was the sense of belonging,” Erickson said. “Even as the most non-traditional non-traditional student those stone walls had ever seen, I always felt like the professors and fellow students were glad I was there.”