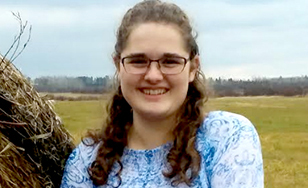 A writing center tutor at St. Scholastica has been named the top student employee at the College as well as in the state of Minnesota.

Katelynne Schatz, a senior English and secondary education major from Kettle River, MN, has worked for the Rose Warner Writing Center under the supervision of center director Steven Backus for three years. In his nominating form, Backus praised her communication skills, welcoming personality, and poised and mature demeanor. He called her hardworking, honest, fair and dependable.

“Katelynne is first and foremost an expert communicator, which makes her a perfect representative of the Rose Warner Writing Center, where words matter,” Backus wrote.   “She puts students at ease with empathy and sensitivity, which is especially important in the Writing Center because many students are already experiencing anxiety with writing and critical thinking. She’s never stressed out or rushed or nervous, but remains consistently calm and mature, which adds to her overall clear communication.”