Home » About Us » News » St. Scholastica joining the MIAC 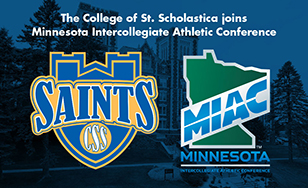 “We were approached by MIAC leadership recently about the possibility of membership,” said St. Scholastica President Barbara McDonald. “We did an extensive internal assessment on what the move would mean for not only our athletics department and student-athletes, but the College as a whole. This is a very good fit with our institutional identity, and with the aspirations of Saints coaches, student-athletes and fans. We look forward to joining our Minnesota private college peers in the MIAC.”

“This is an exciting day as we welcome St. Scholastica to the MIAC,” said Rebecca Bergman, Gustavus Adolphus College president and chair of the MIAC Presidents’ Council. “St. Scholastica has a strong commitment to the NCAA Division III philosophy and shares the vision of quality athletics, academics, student-athlete well-being, and integrity that we value in the MIAC. The Saints have been a familiar opponent for many years and it is with great pleasure that we now welcome them as a conference member to begin this new chapter in MIAC history.”

St. Scholastica, which sponsors 22 varsity sports, will be part of the MIAC in 20 of those sports as the men’s and women’s nordic skiing programs will remain a part of the Central Collegiate Ski Association (CCSA).

St. Scholastica’s men’s and women’s hockey programs will be moving to the MIAC  from the Northern Collegiate Hockey Association (NCHA), marking the first time the hockey programs have been under the same conference affiliation as the rest of the CSS athletics department.

“Our pursuit of athletic excellence is in line with the core values of the MIAC,” St. Scholastica Director of Athletics Franco Bari said, “and we have a strong commitment to enhancing various areas for competitive success as we prepare for the transition. In addition, we have an extremely experienced and dedicated staff who are heavily invested in our programs and while this move will provide us with a different type of challenge, I am confident in our ability to rise to the occasion.”

The move to the MIAC will end membership in the Upper Midwest Athletic Conference (UMAC) for 18 of St. Scholastica’s varsity programs. St. Scholastica has been part of the UMAC since 1995, with some programs connected to the league since the mid-1980s. Since the mid-1990s, the Saints have won the conference’s Jerome Kruse All-Sports Award 16 times, including the last 11 consecutive. The programs have won 210 UMAC Regular Season Championships and 106 UMAC Postseason titles.

“We have been grateful for the opportunity to compete in the Upper Midwest Athletic Conference throughout the years and we are proud of our many memorable achievements,” Bari said. “I have the utmost respect for the UMAC leadership and member institutions, which made this a very challenging decision. The conference has enabled athletic departments like CSS to gain a footprint at a national level and we will miss the relationships formed over the years as a UMAC member. We hope to continue our rivalries in the non-conference.”

“Our hockey programs clearly have a deep history with the Northern Collegiate Hockey Association,” said Bari. “While we truly appreciate our experience as members of NCHA, we look forward to the opportunity of aligning our hockey programs with the other CSS sports competing in the MIAC.”

St. Scholastica will participate in 20 of those 22 championships as it does not sponsor men’s and women’s swimming teams.

Along with St. Scholastica joining the conference in 2021, Macalester College will be re-joining the league in football as the conference transitions to a 10-team, two-division format. One division will consist of St. Scholastica, Carleton, Gustavus Adolphus, Saint John’s and St. Olaf. The other division will consist of Augsburg, Bethel, Concordia-Moorhead, Hamline and Macalester.

Each MIAC team will play eight conference games, including four “in-division” games, three “crossover” games, and one “playoff” game. The final week of the regular season will function as “Championship Week,” wherein teams will be ranked 1-5 in each division based on the current season’s in-division games only. Each team will then match up with the corresponding seed in the other division for a “playoff” game. The winner of the contest between the two divisional leaders will receive the MIAC’s automatic qualifier to the NCAA Division III Football Playoffs.

“The MIAC has a long and storied tradition in the sport of football,” MIAC Commissioner Dan McKane said. “This divisional model will usher in a new era in MIAC football history and we look forward to the excitement that will bring to our institutions, rivalries, student-athletes, and fans.”