Home » About Us » News » College’s next leader in the news

College’s next leader in the news 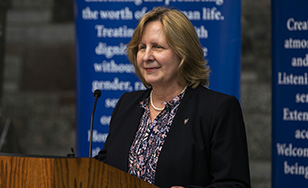 St. Scholastica has announced that Dr. Barbara McDonald will become its 13th president effective Aug. 5, 2019, and the news has attracted attention in the local and state media.

Dr. McDonald was introduced to a large crowd of St. Scholastica community members during an on-campus announcement May 30 in the Benedictine Commons. Among the media outlets covering the event were the Duluth News Tribune, the Minneapolis Star Tribune, WDIO-TV Channel 10, FOX-TV Channel 21, KBJR-TV Channel 6, Business North, the Grand Rapids Herald Review, the Catholic Spirit, CCX Media, ABG Search, and KDAL-FM. Here is our own highlight video, as well, and a photo album.

“Dr. Barbara McDonald is a visionary leader whose wide-ranging experience and student-centered approach make her the right person to lead The College of St. Scholastica,” said Christopher Dolan, chair of the St. Scholastica Board of Trustees. “Throughout her career, which includes deep familiarity with Northeastern Minnesota, she has shown an ability to forge productive relationships, cultivate innovation and build support for institutional goals in service to students’ success. She is a leader of proven integrity and insight.”

Dr. McDonald, 61, comes to St. Scholastica from North Hennepin Community College (NHCC) in Brooklyn Park, MN, where she has served as president since 2015. NHCC is one of the largest and most diverse community colleges in the state, serving over 10,000 students. It is part of the Minnesota State Colleges and Universities system (Minnesota State). McDonald will retire from Minnesota State on Aug. 2, 2019, after 22 years of service.

“I am thrilled and honored to be given the opportunity to serve as the 13th president of The College of St. Scholastica,” McDonald said. “I look forward to working alongside our outstanding students, faculty, and staff as we move the College forward to a bright future. I want to thank the Board for their confidence in me and the St. Scholastica family for welcoming me to their fold.”

Dr. McDonald will succeed President Colette Geary, who announced in January that she would depart St. Scholastica to spend more time with her family. Geary became president in July 2016.

“Dr. McDonald has a history of building successful teams throughout her career,” Ives and Rolle said in a joint statement. “Her inclusive leadership style fits perfectly with St. Scholastica’s vision, mission and values and will serve as a foundation for collaboration and consensus building. In addition, Dr. McDonald not only has had experience living and working in numerous foreign countries, but has shown extensive leadership in supporting diversity and inclusion. We’re very excited to have her on campus.”

Dr. McDonald’s work within the Minnesota State system started at Rainy River Community College in International Falls, MN, from 1997 to 1999, where she taught and served as faculty assessment and service learning coordinator. From 2000 to 2014 she served in various leadership roles in academic and student affairs at Itasca Community College (ICC) in Grand Rapids, MN, where she was promoted to provost. She then served as interim president for one year at Minnesota West Community and Technical College based in Worthington, MN.

McDonald has served on many civic boards including the Itasca Economic Development Board, the Grand Itasca Hospital and Clinic Board, the Reif Performing Arts Board, and others. A Catholic, she also served on the Parish Council of St. Joseph’s Catholic Church in Grand Rapids.

A Presidential Transition Committee, chaired by Trustee Emeritus Karen Alworth and Vice President of College Advancement Chris Mueller, has been formed to welcome Dr. McDonald to the College and to assist her in building relationships both on campus and in the broader community.