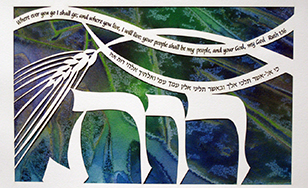 St. Scholastica is co-sponsoring with Temple Israel of Duluth a program that will bring an acclaimed Biblical scholar to the community for a presentation about understanding the Book of Ruth.

Avivah Zornberg’s presentation, “I Am A Stranger: Becoming Ruth,” will be at 7 p.m. Thursday, May 9 at Temple Israel, 1602 E. 2nd St. in Duluth. The event is free and open to the public.

Ruth, an important figure in all of the Abrahamic traditions, is identified as an ancestor of King David and of Jesus. And yet, as a Moabite when she joins the Israelites, she views herself as a stranger in more ways than one. Who is Ruth? What is the process by which she makes her way into a foreign culture and religious tradition? What shapes her destiny? Zornberg will explore the story of Ruth and the process by which she is integrated into her new community.

“It is simply immense for us as well as all the faith communities in Duluth who consider themselves part of the Abrahamic tradition,” Pogorelskin said. “We hope to build on this visit and invite Avivah back.”

Zornberg was born in wartime London in 1944 and grew up in Glasgow, Scotland, where her father was a eminent Rabbi and the head of the Rabbinical Court. She studied with him from childhood; he was her most important teacher of Torah. She went on to earn a BA and PhD in English Literature from Cambridge University. Her career as a teacher and speaker has flourished over the years at various institutions of adult Jewish learning in Jerusalem as well as in the United Kingdom, Canada, South Africa, Australia, Hong Kong, Finland, Sweden, Russia and Poland. On her annual five-week tours of the United States, she lectures at universities, synagogues, Jewish community centres and psychoanalytic institutes, and also travels to the UK, where she holds a Visiting Lectureship at the London School of Jewish Studies.

Zornberg’s interpretations of the Five Books of Moses, based on literary theory, psychoanalysis and philosophy, have led to the writing of five books: “Moses: A Human Life;” “Bewilderments: Reflections on the Book of Numbers;” “The Murmuring Deep: Reflections on the Biblical Unconscious;” “The Particulars of Rapture: Reflections on Exodus;” and “Genesis: The Beginning of Desire,” for which she won the National Jewish Book Award. She is also the author of many other publications.

A sale of her works and a dessert buffet will follow the talk. The event is part of the Silver Family Lecture Series. Sponsors include Robert Silver and the Oreck-Alpern Interreligious Forum of The College of St. Scholastica.