Home » About Us » News » A musical expression of “Something Borrowed”

A musical expression of “Something Borrowed” 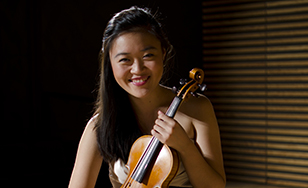 St. Scholastica will host a violin recital at 7:30 p.m. Monday, Nov. 25, in the Mitchell Auditorium on campus.

Violinist Sophia Han will present “Something Borrowed,” a nod to the wedding tradition of having “Something old, something new, something borrowed, something blue.” These are the themes of four recitals performed by Han – a violin professor at Southeast Missouri State University – offered in preparation for her own wedding. Described by the Classical Voices of North Carolina as “a polished [and] fully professional performer,” Han has performed as a guest soloist with orchestras across the country and has appeared on tour with artists such as Michael Bublé.