Home » About Us » Sentinel Blog » The restorative power of a social work major: One student’s story

The restorative power of a social work major: One student’s story 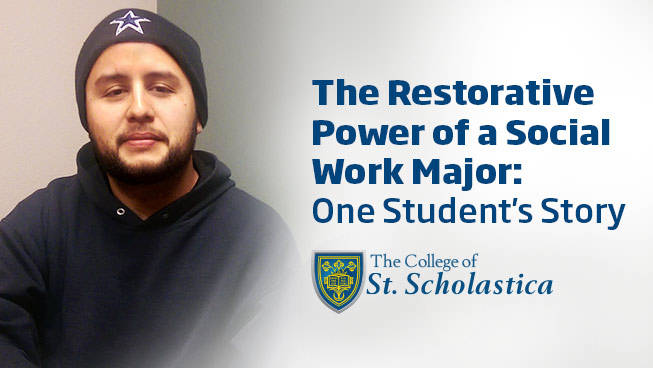 “It might seem like a common answer, but I want to help people,” says Jose Luis Martinez Jr. when asked why he chose to pursue a degree in social work.

Martinez comes from a tightly-knit, Mexican-American family that planted roots in Phoenix, Arizona shortly before he was born. He is the oldest of five children, so playing the role of caretaker has always been second nature to him—a reality that was reinforced when he became a father.

Martinez provides for his wife and children by working full-time at a Phoenix-area grocery store. But on top of the time he dedicates to his family and job, he is also earning a degree in social work.

His motivation? Martinez knows firsthand what it’s like to have a developmental disability disrupt an educational experience. Martinez and his brother were both diagnosed with bipolar disorder at a young age, which is why he hopes to dedicate his professional life to helping others struck by the same affliction. Here is his story.

From personal struggle to professional triumph

Bipolar disorder is a manic-depressive illness that spurs unusual shifts in mood and energy, which greatly affects one’s ability to perform daily tasks. Symptoms of the condition often manifest themselves in poor performance in school or work, difficulty maintaining personal relationships and, in severe cases, thoughts of suicide.

Several of these symptoms were visible early in Martinez’s life as a young student. Fortunately for him, he was appointed a dedicated team of teachers and support figures to accommodate his condition. His brother wasn’t so lucky.

Martinez says his brother’s teachers and medical staff chalked up his symptoms to behavioral issues. Things only began to change after their father, a practicing social worker, intervened.

Social workers see clients within their environments—within their families, in school, at work—to ensure prescribed treatments are more comprehensive and holistic. That’s why Martinez’s father brought a case manager and psychologist to a meeting of the school’s teachers, medical staff and authority figures. Together, they divulged the details of his sons’ disorders and discussed ways to accommodate their learning styles in the classroom.

“If my father hadn’t advocated for my brother, I believe my brother would have had a much more difficult time in school,” Martinez says. He feels social workers are crucial for young people struggling with mental health disorders—especially considering the social stigma and widespread misunderstanding of these afflictions.

Half of all cases of mental illness begin by age 14, according to the National Institute of Mental Health, but nearly 50 percent of them go untreated.

The Martinez brothers were fortunate to receive the help they needed in school, but for Jose, the struggle didn’t end there. His first experience in higher education began in 2010 at Glendale Community College, but ended a year later due to difficulties brought on by his disorder.

But, despite that setback, Martinez would not be defeated. Instead, he saw the disappointment as a challenge and welcomed it as an opportunity to take back his life.

Approximately 60 percent of mental health professionals are clinically trained social workers. Some specialize in military and veteran services, others focus on disaster relief programs; some facilitate community mental health programs and many work directly out of hospitals or private practices.

Martinez knows his future lies somewhere in the realm of prevention, treatment and rehabilitation.

Looking toward an evolving future

Although he’s unsure in which direction his career might lead, Martinez hopes to draw upon his own experience in his social work practice. He’s hoping to work with children who face the same struggles and challenges he and his brother faced.

The accelerated social work program at The College of St. Scholastica appealed to Martinez because of its convenient course schedule, the small class sizes and the level of personal attention and mentoring each student receives. These factors will greatly benefit him as he continues his educational journey.

“Education gives us a voice,” Martinez says. “It teaches us how to communicate our concerns, how to properly argue fact versus opinion and how to think objectively.”

When asked about his 5-year plan, Martinez’s answer is an ambitious one. He hopes to complete his bachelor’s degree in social work, but also begin pursuing a master’s degree in the field. After that, he wants to attend law school so he can advocate for social services on a larger scale.

Jose Luis Martinez Jr. let his personal struggles with mental health drive his passion to help others through the field of social work. If you’d like to learn more about a career in social work, take a look at this article that outlines 8 of the most common types of social workers.