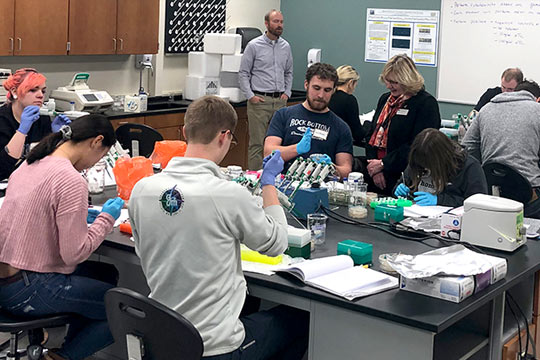 For years, scientists have been searching for an effective way to treat drug-resistant bacterial infections. St. Scholastica student researchers are playing a role in efforts to find a solution to this complex problem.

Their field of inquiry is bacteriophages, sometimes called the "dark matter" of the biological world. Found anywhere that bacteria exist — in soil, plants and even the ocean — they're viruses that infect and destroy bacterial cells. They could someday present a viable alternative to conventional antibiotics.

"They're the last unexplored biological domain," said Dr. Kara Thoemke, associate professor of biology. "They're the most numerous thing in the biological world, but our level of knowledge about them is very low."

St. Scholastica students have been studying them since Associate Professor of Biology Dr. Daniel Westholm introduced the Phage Discovery and Genomics program in 2011. In 2019, St. Scholastica was one of only seven schools in the country selected to pilot a molecular analysis research project through the Science Education Alliance (SEA), sponsored by the Howard Hughes Medical Institute.

Nine students took the new course during the fall 2019 semester under the direction of Westholm and Thoemke. The students were so invested in the project that they came in outside of class time to work on it.

"They were very excited about it," Thoemke said. "They worked really hard."

"It wasn't a class where you just had to sit and listen to a lecture," said biochem major Alex Larson '20. "It's really hands-on. You're doing the research yourself, you're drawing conclusions from what you're doing. It gets you to start critically thinking."

"It revealed to me that research isn't boring," said biology major Sadie Nowak '19. "It's a lot more engaging than I ever thought it would be."

Erin Burke '19, a biology major, said it was her favorite class in her entire time at the College.

"I'm going to remember this for a long time," she said.

Students get their hands dirty, literally, and experience every part of the scientific process. They take soil or water samples and isolate bacteriophages in the samples, identifying as many types as they can.

"You add bacteria to your dirt in the hopes that a phage is present in the soil," Nowak explained. The moment a phage is discovered? "You feel like a real scientist."

Burke agreed that the lab work can be deeply rewarding.

"You don't know what's going to work," Burke said, "but when it does, it's the best day ever."

Next, using molecular cloning techniques, the students isolate genes from each phage and study how the genes function.

"There was a lot of troubleshooting," Nowak said. "We learned a lot about the process of gene replication, viral infection, and the nature of doing these types of experiments, which was really helpful."

Their efforts paid off, Thoemke said.

"Of all the schools that have done it, we actually cloned the most genes of any school. They were really successful." 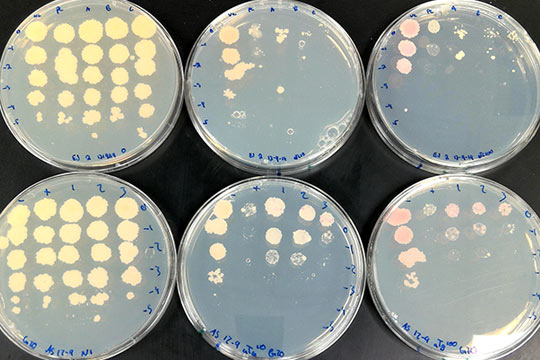 The phages are shipped to a storage facility in Pittsburgh to be catalogued for possible medical applications in the future, Thoemke said. Currently, phage therapy is an experimental treatment used only in emergencies, but there have already been some instances where it's saved lives when all else failed.

"If we are able to identify specific genes that are toxic to the cell, we can perhaps find certain phages or genes in the phage that can kill strains of bacteria that may be really harmful to humans, like tuberculosis or MRSA," Nowak said. "If we can find a specific toxic gene or toxic phage to target that bacteria, it could be a really good therapeutic treatment."

Theomke said the phage course provides students with credentials for advancement — and confidence.

"Science is kind of an elite society," she said. "It's a culture that's really difficult to break into, particularly for first-generation students who haven't been exposed to that culture. This is a great gateway for them into science."

For Anna Totsch '21, a biology and biochemistry major, one of the highlights was a trip to the Mayo Clinic to examine the phages' structure with an electron microscope.

"This class made me decide that I want to become a soil scientist," she said.

Biology major Ashlie Johnson '20 said the experience will stay with her for decades.

"The work that you did is something that you can't forget," she said.

Nowak agreed. The proof is still on her phone, which is filled with pictures of lab tests and toxic genes that she said will "probably be on there forever."

Since 2011, St. Scholastica students have isolated 116 previously unidentified phages, all of which are stored at the archive facility at the University of Pittsburgh, and have annotated 21 phage genomes. In fall 2019, students cloned 48 individual genes from mycobacteriophage Brusacoram and conducted preliminary gene function assays on 27 of these genes.

A new cohort of students will continue working to clone and characterize all 78 genes in the phage Brusacoram genome in the fall 2020 Advanced Bacteriophage course.