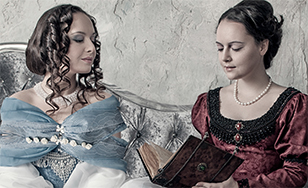 The play tells the story of sisters Elinor and Marianne Dashwood, whose lives have been thrown into disarray by the untimely death of their father. Elinor and Marianne are in search of husbands, but no longer enjoy the social standing they'd experienced while their family patriarch was still alive. In Victorian England, social standing and wealth often dictated marriages more than love and affection. The sisters are forced to find the balance between sense and sensibility or threaten their chances for true love and happiness.

The production is directed by Tammy Ostrander, Ph.D., dean of the St. Scholastica School of Arts and Letters. The lead roles are filled by Jemma Provance as Marianne Dashwood; Katherine Grotte as Elinor Dashwood; Theodore Webster as Willoughby; Mitchell Gertken as Colonel Brandon; and Conor Reindl as Edward Ferrers. The adaption from Austen's novel is by actor/playwright Kate Hamill.

The rest of St. Scholastica Theatre's 2017-18 season will include:
"Eleemosynary" - a family drama featuring three generations of women coming to terms with their relationships. Premieres at 7:30 p.m. Feb. 2, 2018.
"Journey's End" - the story of a group of officers in the British trenches during World War One. Premieres at 7:30 p.m. April 13, 2018.