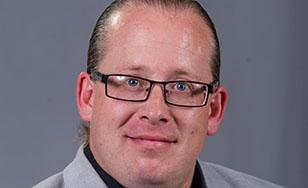 An Ojibwe linguist and St. Scholastica faculty member traveled to Washington, D.C. this week because his children were selected to sing at the 2014 White House Tribal Nations Conference.

Michael Sullivan, assistant professor of Ojibwemowin at St. Scholastica and an Anishinaabe linguist from the Lac Courte Oreilles band of Lake Superior Ojibwe in Wisconsin, traveled to the U.S. Capitol with his wife and two of his sons, 10-year-old Niizhoo and 7-year-old Preston. The boys have become very well established on the powwow circuit, Sullivan said, and Niizhoo even has his own CD.

"They've been singing since before they could walk," Sullivan said.

They performed two traditional Ojibwe songs Wednesday morning during the opening of the conference.

Sullivan hopes to have plenty of video and photos to share of the experience for a colloquium he is scheduled to present at 3:40 p.m. Friday in Tower Hall (room 4119) on campus. The talk will focus on the preservation of the Ojibwe language.

The conference will be held at the Capital Hilton in Washington, D.C., and will give leaders from 566 federally recognized tribes a chance to speak to President Obama and members of the White House Council on Native American Affairs.