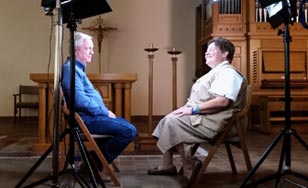 St. Scholastica Monastery’s Sister Lisa Maurer is an assistant coach with the Saints football team, a fact that has attracted media attention on a national scale. The latest story appeared in the Fall 2015 edition of the NCAA's Champion magazine, and she was featured on the CBS Evening News on Sept. 29. Last year, in her first season as a coach, she was written up by the New York Times among several other national media stories. What has all the attention been like? We wanted to find out.

What do you hope people will take away from your story?
"On a big level I hope that they see how God is active in their lives, because who would have ever thought that I could be a Sister and be a coach at the same time? I hope they’ll see how sports and faith can come together.

"I hope this is bringing good things to St. Scholastica, to the Monastery, to the College and to the football team. I just hope that people will learn that we’re doing great things here and that maybe it will bring people to join us."

What was it like to be interviewed by a national CBS correspondent?
"It's pretty cool, obviously. It was kind of crazy to think that me simply being me would garner so much attention. I'm just hanging out with the football team doing something I love."

Were you able to relax and be yourself while talking with CBS correspondent Dean Reynolds, and while you were mic'd up during football practice?
"I have to admit, with the CBS story I probably felt the most comfortable compared to other stories. Maybe it's because I've done it a few other times. I mean, it was CBS, so I figured they knew what they were doing. I didn't feel I had to speak in sound bites; I really did feel like I was just talking to Dean. I was able to forget the cameras."

Did this experience change the way you watch TV news and interviews?
"It gives you a great respect for when they put together a '60 Minutes' story or a 'CBS Sunday Morning' story. It gives you an idea of how much time they spent with the subject and how much research they did to put that together, and to make it seem seamless, even though they're telling a long story in a relatively short amount of time."

What was the most fun part of the CBS filming experience?
"It was pretty cool watching the football players do their interviews, and hanging out with the crew, going out for supper with them, goofing around with them up on the football field, even while they were filming."

What was the reaction from your family and friends to the CBS News story?
"People are pretty excited and very proud. Some of my better friends gave me a hard time about it, as only good friends and family can do, but they were very, very proud."

What did it feel like to see yourself on TV?
"It wasn't super weird because I've done it before. I was calm about it, but then I’d think, 'Oh my gosh, this is the CBS Evening News.’ So then I’d started imagining all those people sitting around their supper table watching the evening news like we used to do growing up, and I am one of the people that they're all seeing. That was crazy!"

Which has been your favorite story so far?
"They've all been amazing. I've been so grateful; thanks be to God that they've all been positive things and they've all reflected well upon Scholastica and who we are as a football program. I have to admit that the (Minneapolis) Star Tribune article was my favorite, just because that's the newspaper I grew up reading all the time. And that Scholastica and I were talked about on ESPN’s “Mike & Mike” show…that and the Star Tribune hit totally close to home for me."