Grace on the Gridiron 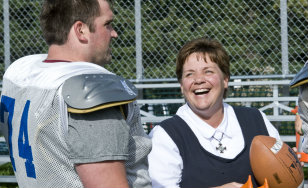 Sister Lisa Maurer of the St. Scholastica Monastery recently became the first-ever female on the College's football coaching staff - and possibly the only coaching sister in all of college football. Her story is generating some buzz, including a great page-one story in the Minneapolis Star Tribune. Writer Rachel Blount captures not only Sister Lisa's enthusiasm and special contributions, but the team's culture as ably expressed by Coach Ramler and his players.

Just as she's summoned to daily prayers by the tolling of the chapel bell, she found herself drawn to the team's practices by the sound of the coaches' whistles.

Warm and outgoing, she easily bonded with players and coaches and quickly established herself as one of the Saints' biggest supporters. Head Coach Kurt Ramler asked her to become a coach for the kicking team, and she accepted.

"She always has a very positive attitude and a bright smile," he said. "She also tends to crack a joke or two to lighten the mood at practice."

For more media attention about the Saints football program, check out our new Fox Sports North show, "Inside the Huddle at St. Scholastica."